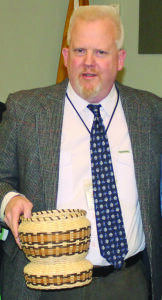 Judge J. Matthew Martin, shown at his retirement from the Cherokee Court last year, has been named the 2014 recipient of the Franklin N. Flashner Award. (SCOTT MCKIE B.P./One Feather)

Judge J. Matthew Martin, of Asheville, recently retired associate judge of the Cherokee Court, is the 2014 recipient of the Franklin N. Flaschner Award.

Martin, 53, provided 11 years of service to the Eastern Band of Cherokee Indians, and his jurisdiction included the largest Indian reservation east of the Mississippi River. A graduate of the University of North Carolina and its School of Law, he also holds a master’s in judicial studies from the University of Nevada-Reno. Martin previously served as a clerk to a U.S. district judge, and argued a case before the U.S. Supreme Court at age 31. He teaches federal Indian law at UNC and Elon University, and is in part-time law practice with his father.

The Franklin N. Flaschner Award is given out by the National Conference of Specialized Court Judges of the Judicial Division of the American Bar Association to honor a judge in a special and limited jurisdiction. The award is named for a late chief justice of the District Court of Massachusetts, and will be presented at the ABA’s Annual Meeting this August in Boston.