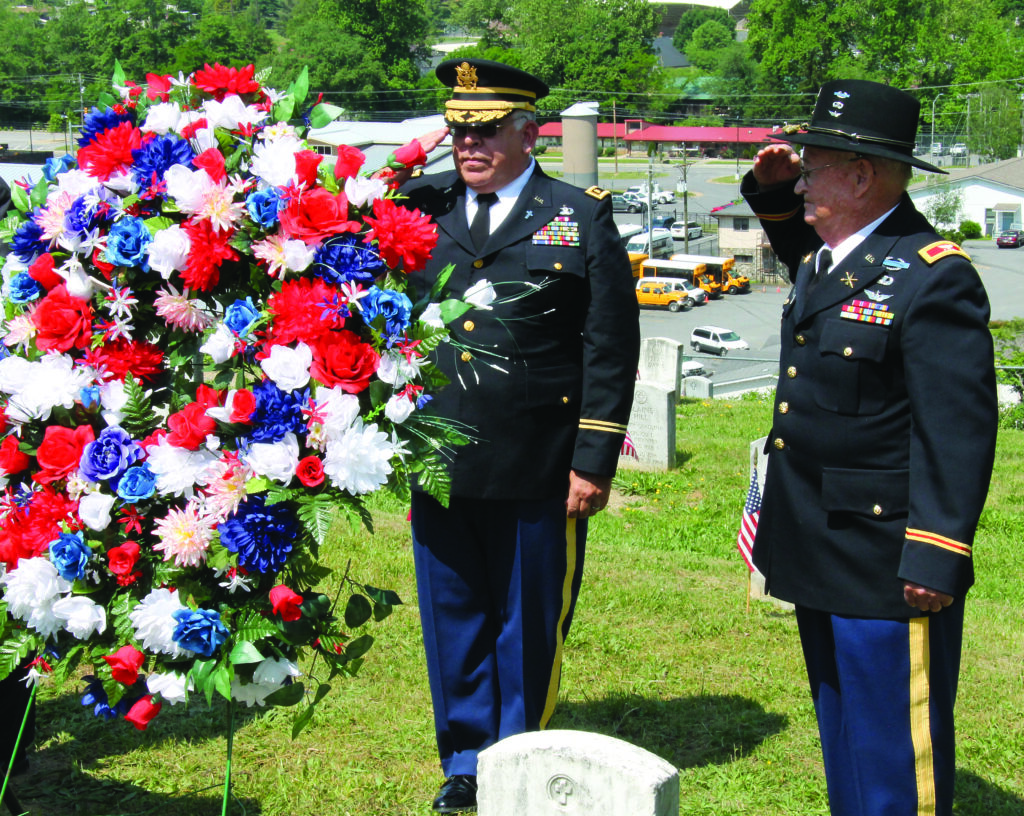 Maj. Bill Underwood (left) and Col. Bob Blankenship salute after the laying of the wreath at the Yellowhill Veterans Cemetery at the Memorial Day observance on Monday, May 26. (SCOTT MCKIE B.P./One Feather photos)

Those men and women who made the ultimate sacrifice for their country were honored during a Memorial Day ceremony at the Yellowhill Veterans Cemetery on Monday, May 26.  The event was hosted by the Steve Youngdeer American Legion Post 143. 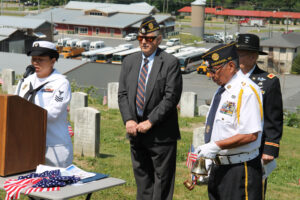 “Today, we honor those who have fallen and given their lives so that we might have the freedom that we have today,” said Big Cove Rep. Perry Shell, a US Army veteran who gave the opening prayer.  “Today is not about barbecuing and NASCAR and all of these other things.  Today is the day that we dedicate to remember those who gave their lives so that we can have the freedoms that we have today.  It is always an honor to remember them and honor them.”

Post 143 Commander Lew Harding commented, “Today, we honor those who have given their lives for our country.  It is incumbent upon us that remain to remember and memorialize, to honor their spirit and their memory as we gather here today and as we do here today.   The annals of the history of country are filled with their sacrifice, their heroism, their willingness to lay it all on the line again and again.”

He went on to say, “Many of you ladies and gentlemen here today have participated in such an endeavor, but today we are here to memorialize those who were lost…we pause today to remember those who paid the price for our freedom in lost dreams and in lost lives.” 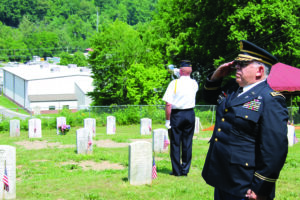 Chavella Bailey, US Navy, and Ernest Panther, U.S. Air Force veteran, performed the Ringing of the Bell ceremony to honor all of the EBCI tribal members who have lost their lives in combat.  Bailey read the names as Panther rang the bell in their honor.

Following the reading of names, Col. Blankenship read “To Those Who Served” and “In Flanders Field” which was followed by the laying of the wreath by Col. Blankenship, Maj. Bill Underwood and Sgt. Alva Brown.

The ceremony closed with the gun salute by the Post 143 Color Guard and the playing of “Taps” by Warren Dupree, Post 143 service officer, and Leo Pete.