Thompson was on the Braves varsity boys basketball team that won the Smoky Mountain Conference regular season title, and he was also a stand-out soccer player.  Mintz, who is headed to Lenoir-Rhyne College on a full basketball scholarship, helped lead the Lady Braves varsity girls basketball team to its fourth straight Sectional Championship. She was also a stand-out performer in soccer and track. 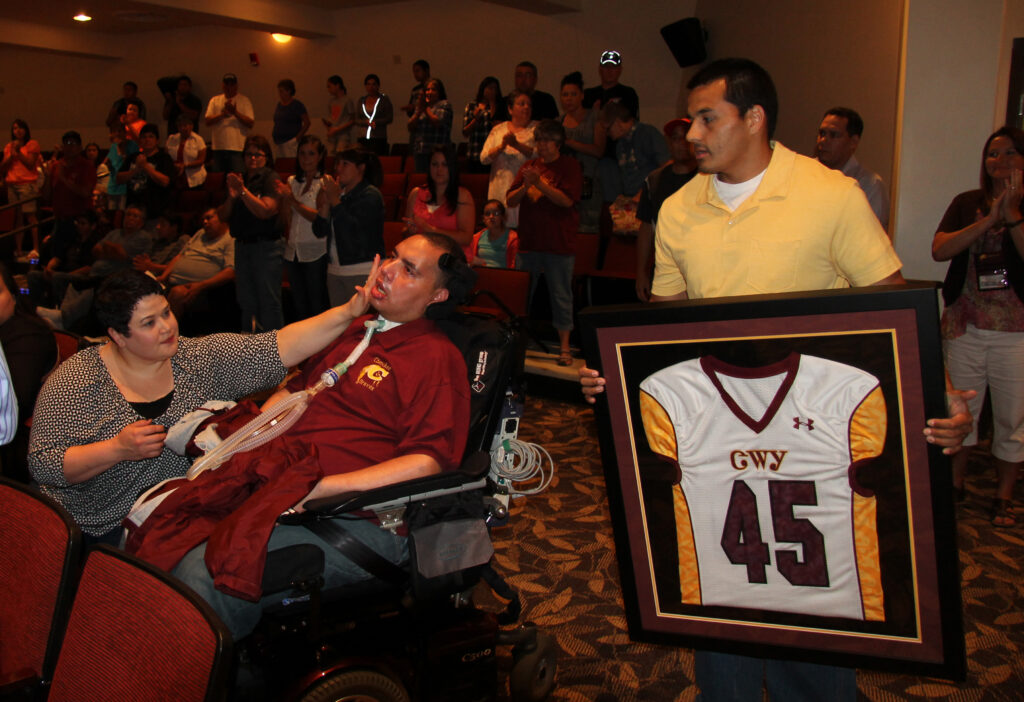 Rod Cooper receives a standing ovation as his #45 jersey is retired during Friday’s event.

A highlight of the evening was the retiring of two jerseys of former Braves varsity football players.  Rod Cooper, CHS Class of 1990, had his #45 jersey retired along with CHS Class of 2006 alumni Johnathon “JD” Davis, who passed away earlier this year and had his #4 jersey retired.

Cooper, currently waging a courageous battle with Lou Gehrig’s disease, ran for over 2,700 yards in his career as a Braves running back.  His former coach, Mitch Myers, said on Friday night, “I am not sure who the best football player is that I’ve ever coached, but I can say without a doubt who the best running back is, #45, Rod Cooper.”

After leading western North Carolina in rushing his junior and senior years, Cooper entered the U.S. Army upon graduation and served in the Gulf War.  Following his stint in the military, he returned to Cherokee where he joined the Cherokee Police Department and became instrumental in helping literally thousands of Cherokee youth through the D.A.R.E. program.

Davis also excelled in the backfield and amassed a total of 1,803 rushing yards and 3,027 passing yards during his three years on the varsity Braves team.  “Johnathon Davis was a tremendous running back,” said Craig Barker, then-head coach of the Braves.  “He was a tough football player; one of the toughest players I’ve ever been around.”

Shawn Crowe, emcee for the evening, thanked the community and families for their involvement in the programs this past year, “All of you have a part in these athlete’s achievements, especially the parents.”

A full listing of awards is as follows:

Rookie of the Year – Simon Montelongo