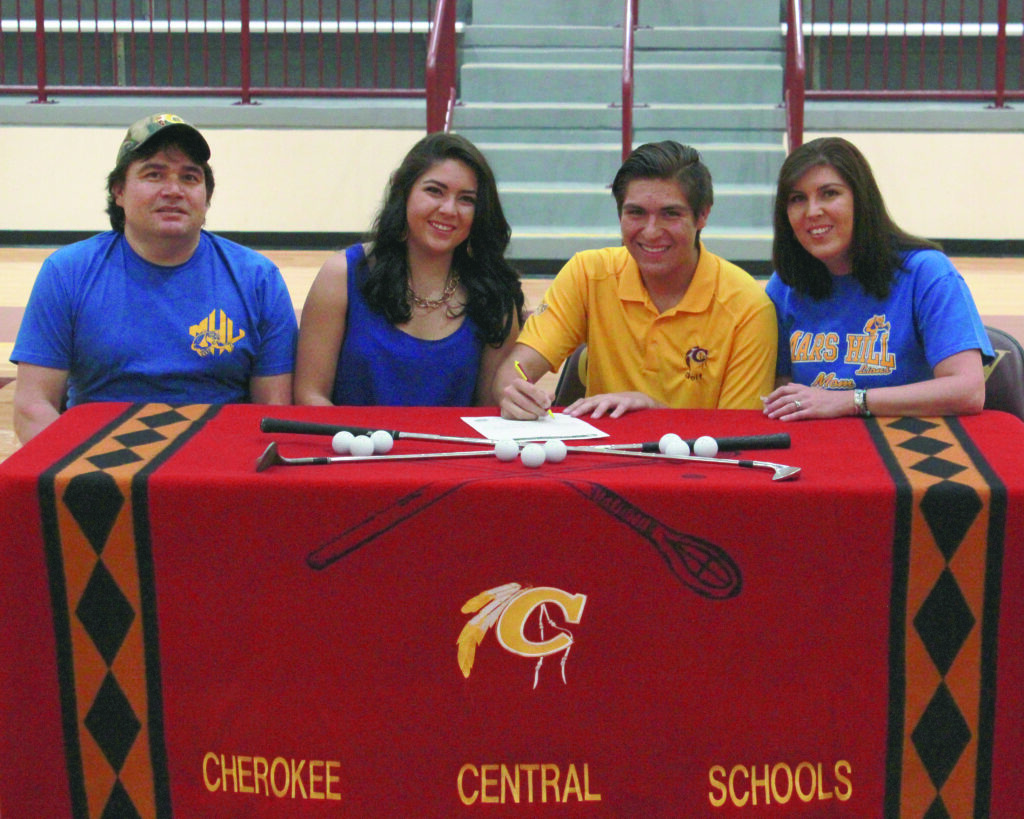 Tagan Crowe (2nd from right) signs a letter of intent on Thursday, May 22 to play golf next season at Mars Hill University. He is shown (left-right) with his father, Peanut Crowe, sister, Madison Crowe, and mother, Radonna Crowe (right). (AMBLE SMOKER/One Feather)

Cherokee High School held a signing ceremony for senior Tagan Crowe at the Charles George Arena on Wednesday, May 21.  Crowe signed his letter of intent to continue his illustrious golf career as a Lion at the Mars Hill University.

Coach Andrew Maney stated, “It’s a great day for Tagan. I’m very happy for him and his family.  It’s a lot of hard work paid off.  He’s been going at it since day one since he started playing golf really hard.  I just expect him to get better and expect nothing but the best when he’s there.”

Crowe commented shortly after the signing, “It’s a goal of mine to eventually make it to the PGA Tour, and you have to start somewhere.  “I would like to thank Mars Hill for giving me this opportunity.”

Making it to the PGA requires a lot of hard work and dedication, but he is well on his way.  While he has only been playing golf for just three shorts years, it is pretty common to find him on the course where he practices five times a week.

When asked about his decision to take the sport seriously, he described the initial round very candidly, “It started at Sequoyah National, I had been hitting (the ball) poorly all day and on the eighteenth tee I crushed it down the middle.  I was like, man I can be good at this. So ever since the beginning, I’ve had high expectations of myself.”

His father, Peanut Crowe, said, “He’s probably as dedicated as kids ever been.  He’ll play 54 holes a day, rain or shine.  I guess hard works paid off.  I’m just glad people like Bud Smith took him under his wing and played with him, then coaches at the high school.  He’s never really had any formal training, so we’re looking forward to college when he gets in there one-on-one with a lot of different people, to see how good he really can be.”

Holding back tears with elation and pride, Radonna Crowe, Tagan’s mom, said, “It breaks my heart for him to leave my home because he’s my baby.  But, to play golf, I’m excited, I’m proud of him.  I don’t know how to explain how proud I am of him…I just couldn’t be more proud, I’m about to cry.  I’m just excited.”