“The SOAR Awards program gives tribal programs the opportunity to promote ways that they accomplish fiscal responsibility, sound financial decisions, best business practices, and transparency,” said Rebecca Claxton, EBCI Internal Audit office.  “It gives them a chance to demonstrate pride in what they do and pride in their programs.” 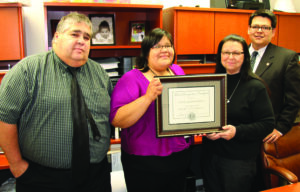 She said the main award, the Fiscal Excellence Award, is named after the late Principal Chief Noah Powell who, according to the Office of Internal Audit, “demonstrated the utmost fiscal responsibility and transparency to his people.”

Kanott, Cherokee Choices manager, related, “It is an honor.  We manage multiple federal grants, and it is important that we follow the policies and procedures.  I really have to brag on my team.  They are great.  They love their jobs.”

The Risk Management Division won “for its efforts to become a highly efficient, dependable and responsive department”, and their team includes:  Barbara Owle, Joe Bernhisel and Agnes Reed.

Owle, Risk Management Division manager, said their division was developed three years ago, and since then they have established many safety policies and have organized the workman’s compensation program.  “We’re looking at continuing to drive down costs and look at those liabilities facing the Tribe.  In that, one important role is that we wanted to establish the respect of all the other divisions, and so we were really proud to receive the award and that our work has been recognized at that level.”

Bernhisel, Risk Management Division workplace safety officer, noted, “It is an honor to accept the award.  We didn’t even know it was happening.  It was a really big surprise….it boosted our morale within the department, and it made us feel good about what we’ve been doing as far as the department growing and the huge task that we’ve encountered for the past three years.  It took a lot of hard work for Barbara (Owle), Agnes (Reed), and definitely Cory Blankenship (tribal treasurer).  He’s been an instrumental tool and a leader for us, and we just greatly appreciate it.”

Nominations are now being taken for the 2013-14 fiscal year awards.  The deadline to nominate a program is Friday, June 20.  According to the Office of Internal Audit, “All tribal programs, divisions, offices, enterprises, component units and related entities of the Eastern Band of Cherokee Indians are eligible for participation in the SOAR award program.  Awards will be made only when there are justifiable nominations submitted.”