Great Smoky Mountains National Park Ranger Brad Griest and Townsend Fire Department Volunteer Firefighter Christopher Scarbrough were recognized in Washington, DC on May 8 Secretary of the Interior Sally Jewell for their heroic actions that saved the life of a motorist. 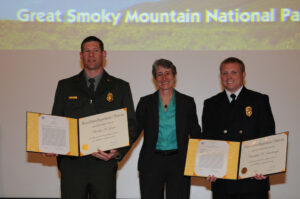 In December 2011, Griest and Scarbrough rescued a barely conscious motorist trapped in a partially submerged vehicle in Little River. They winched open the door against the strong current, freed the driver, secured him to a litter, and lifted him up a steep embankment to an ambulance. The complicated rescue from the unstable truck occurred at night with temperatures hovering around 45 degrees F. Both recipients risked their lives to save a life of another person while on property owned by and entrusted to the Department of Interior.

“We are extremely proud of Ranger Griest, not only for the actions he took leading to this well-deserved recognition, but for also the actions he takes, along with his colleagues, every day to protect park visitors and resources,” said Chief Ranger Clay Jordan.  “We also feel very fortunate that we are aided by such outstanding responders from the community such as Firefighter Scarbrough and the other members of the Townsend Fire Department.”

Jewell presented the awards at the Department of the Interior’s 69th Honor Awards Convocation which included presentations of 16 additional Valor Awards to employees who demonstrated unusual courage in the face of danger. She also presented the Citizen’s Award for Bravery to two other private citizens who risked their lives to save others while on Department of the Interior lands.

“These heroes rappelled from helicopters, scaled cliffs, swam through rapids, and protected park visitors from hazards,” said National Park Service Director Jonathan B. Jarvis. “They put their own lives in peril to help others. Yet, each one of them would humbly say they were simply doing their jobs. Their passion to serve others is inspiring.”

Griest and Scarbrough received their awards in Washington in the company of family members and Townsend Fire Department Chief Don Stallions and Chief Ranger Jordan.