After 16 community workshops involving over 1,000 western North Carolina residents, Southwestern North Carolina’s Opportunity Initiative – or Opt-In – came together to discuss the future of the region at the Opt-In Regional Summit held on Thursday, May 8 at Harrah’s Cherokee Casino Hotel.  Over 225 people attended the event. 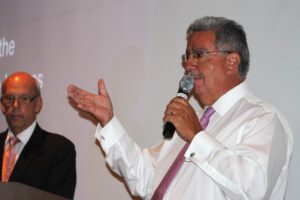 Gavin Brown, Mayor of Waynesville and chair of the Southwestern Commission, served as the emcee for the evening.   “Tonight, we have a chance to create a legacy, and I really think that’s going to happen.  The event tonight is trying to bring together the possibility of planning for the future.”

Opt-In is funded by the Appalachian Regional Commission, the Federal Highway Administration, and the North Carolina Department of Transportation.  It is overseen by the Southwestern Commission Council of Governments.

Vice Chief Larry Blythe serves on that Steering Committee, and he spoke at Thursday’s event.  “When I was asked to participate in the Opt-In program on behalf of the Eastern Band, I immediately saw an opportunity.  I felt through interactions with surrounding counties and communities as a member of the Opt-In team, I would be in a position to tell the Tribe’s story and tell the story as it presently relates to our interest and involvement in western North Carolina.” 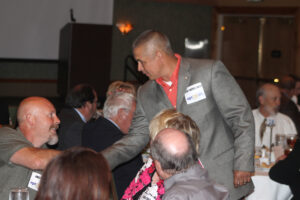 Principal Chief Michell Hicks greets some of the more than 225 attendees at Thursday’s Summit.

“The Tribe’s story is not unlike our neighbors in the surrounding area of western North Carolina,” he went on to say.  “We know that everything – the region’s economy, its infrastructure – begin and end with the mountains and river valleys, and they’re the source of our advantages and they’re the source of our challenges.  And, one of the challenges is connectivity in terms of roads, bridges, internet, etc., but also in terms of connecting community to community over these mountains and these hollers.”

WCU chancellor David O. Belcher gave the keynote address and said that collaborations and partnerships are needed for the future of the region.  “If we, in western North Carolina, are to be successful, we must partner with one another and form a general compact.”

He praised the Opt-In project and said it has “engaged the region’s citizens repeatedly in various forums to identify priorities to chart the regional path forward”.