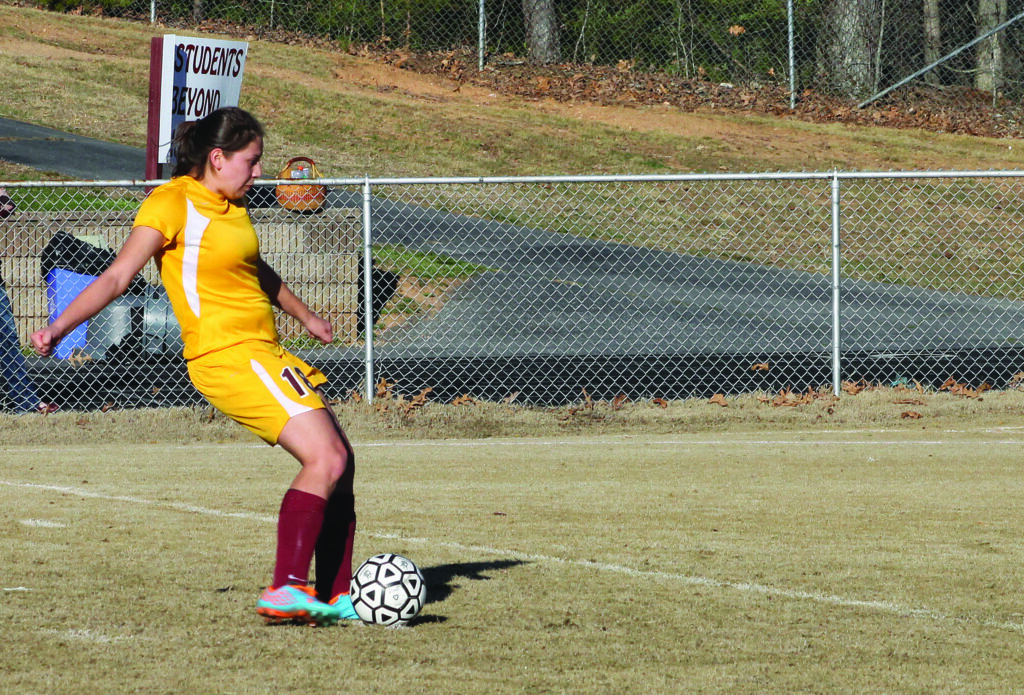 Cherokee’s Taran Swimmer blasts a penalty kick into the back of the net to make it 2-1 late in the match at Swain on Thursday, March 20. (SCOTT MCKIE B.P./One Feather photos)

BRYSON CITY – Crystal clear blue skies and crisp temperatures marked the first day of spring as the Cherokee varsity girls soccer team traveled to Swain County on Thursday, March 20.  A young Lady Braves squad played nice defense throughout most of the game, but came up a little short in the end 2-1.

“We’ve got a lot of new players and a lot who have never played before,” said Lady Braves head coach Sebastian Brun who said his players are working on learning their positions and the game.  “I think the first half and the first goal was just disorganization, but we definitely got our wits about us for the second half.”

Peri Wildcatt unloads on a free kick in the second half of Thursday’s match.

Swain got on the board first as junior Kayla Johnson scored at the 32:33 mark.  Following that goal, Cherokee’s defense tightened and kept the ball out of their half of the field for most of the next 20 minutes.

Then, Swain began to work the ball closer and closer and junior Storm Ledford drilled a shot from around 15 yards out that sank into the left top of the net with 8:46 left in the first half.

Cherokee came out more focused in the second half and sophomore Sidnie Yanez had a shot just miss the mark ten minutes into the half.

Cherokee’s goalkeeper, senior Anna Cline, made some nice saves and played well the entire match.  The two goals she gave up were blasts and would have been hard for a seasoned goalkeeper to stop.

Cherokee got on the board late as senior Taran Swimmer buried a penalty kick in the net with 1:30 left in the match.

The Lady Braves are in action again on Friday, March 21 at 4pm at home against Mitchell.