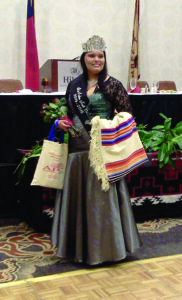 Frankiewicz competed for the title on March 14-15 during the UNITY Conference in Raleigh.  She is the 21-year-old daughter of Melisa Arch and Quinton Frankiewicz of the Birdtown community. She preformed in categories such as traditional talent, regalia, and community service platform in front of tribal leaders and dignitaries from all over the state of North Carolina. Her talent was presenting Bigmeat pottery, and her platform was on reviving tribal traditions. In addition to winning the title, Frankiewicz also received the Chief “Jesse” Memorial Scholarship Award.

“I had such an amazing time meeting all new and old friends, who were great support for me on this journey,” she said.  “I’ve met some previous Miss Indian North Carolina title holders who gave me advice and are willing to help me in whatever I need.”

“It’s such an honor to be the first from Cherokee to receive this title, but I honestly couldn’t have done it without the help of my mom and Granny. They put the hours into helping me on various ways to get ready for the pageant.”

She will now be attending various events and powwows through out the year as she represents all indigenous people in the North Carolina.