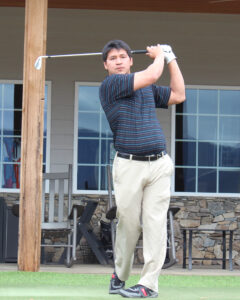 Carr states, “A major goal of mine is to get the people of Cherokee and the surrounding Western NC area more up to date on the golf industry and more involved in the game.  If you’re interested, just come out and you’d be surprised about how much you can become addicted to the game.  For a lot of people, they don’t realize the challenge of the game.  They think golf is boring and it’s not hard or it’s not fun. However, in reality, once they’ve tried it they find it is hard and becomes a challenging sport.  Golf is also a family sport, it’s good for families to come out and spend time together enjoying each other’s company.  Not really focusing on who wins but more on the memories in between shots and having a good time.”

Becoming PGA Certified is an on-going process which requires an active role in the professional golfing community.  The governing body elects members twice annually, and once elected, members must earn PGA points to keep their membership active.  These points can be earned by attending PGA seminars, participating in Jr. Golf camps and attending PGA golf shows such as the PGA Show in Orlando, Fla., which is only available to PGA professionals and affiliates within the golf industry.  Carr plans to become elected soon within the upcoming season.

PGA certification is also a great opportunity to learn and work with the best in the industry.  While working towards his degree at Campbell University, Carr was able to attend seminars from the world renowned putting coach David Orr, whose cliental includes Justin Rose from the PGA and European Tours.  Orr’s teaching method enabled Carr to learn the science and numbers behind the golf processes such as green reading, mental preparation, and even business seminars geared towards the success of golf industry professionals.

Carr began playing golf at the age of eight when the sport was introduced through his father.  Growing up, he and his father would go on the course to work on perfecting their craft while spending quality, family time together.  Both golfers were self-taught through trial and error by mimicking what they saw on TV until they were able to find their game.

Although competing in professional tournaments is not currently a major priority, he is still looking forward to playing in a few, yet to be determined, events in the upcoming season.  The biggest goal for Carr is to help grow the game in the surrounding area and introduce an avenue for families to get together and spend quality time together.

Carr Crowe is currently the Associate Golf Pro at Sequoyah National Golf Club in Whittier.  He is available to teach lessons to anyone looking to start playing the game or anyone looking for improvements on their existing game.