GREENSBORO – A sea of Maroon and Gold inundated the UNCG Fleming Gymnasium on Saturday, March 8 as the site played host to the NCHSAA Regional Finals contest between the Cherokee Lady Braves and the Hayesville Yellow Jackets at 5pm.  Cherokee lost its bid to advance to the State Final Four by a score of 58-49.  The game, originally scheduled for Friday at 7pm, was delayed due to inclement weather in the Greensboro area.  This would be the fourth matchup between the two Smoky Mountain Conference basketball juggernauts with Hayesville entering into the contest with a 2-1 favor in the series.

“It was tough, anytime you lose it’s tough,” said Lady Braves head coach Chris Mintz.  “It was a hard fought game and a few breaks here and there ended up costing us in the third quarter. “ 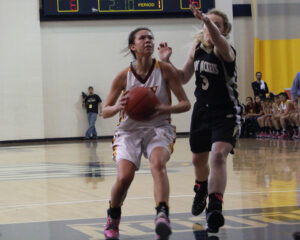 Kendall Toineeta (#3) drives to the basket against a Hayesville defender. She finished the game with 11pts. (AMBLE SMOKER/One Feather photos)

Hayesville took control of the game early by jumping out to a commanding 13-4 lead in the opening minutes before Coach Mintz called a timeout to rally the troops.  The resilient Lady Braves would not go down quietly as they fought tooth and nail to diminish the Hayesville lead to a mere 5 points going into the second quarter.

As the second quarter commenced, the Lady Braves were able to put their sluggish start behind them.  As the Lady Braves returned to the court, a stingy full court press defense put the brakes on the Hayesville offense and limited the scoring opportunities.  Cherokee capitalized on the moment and began putting the ball through the iron to chip away at the early lead established by the Lady Jackets and took a 4 point lead into the locker room. 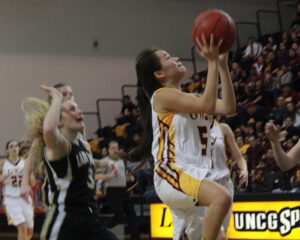 LeLe Lossiah (#5) drives the lane for a lay-up after a fast break during Saturday’s game. She ended the game with 4pts.

Coming out of the locker room for the third quarter, a solid showing from both teams had the game locked in a stalemate with Cherokee taking a single point lead into the fourth quarter.  Unfortunately, a stout performance from the Hayesville Yellow Jackets proved to be too great as the Braves were outscored 21 to 11 in the fourth quarter.

Although the Cherokee Lady Braves came up a little short in their bid for a state title, it was still a special season with many accolades and accomplishments along the way.  When asked about the spectacular season, Coach Mintz stated after the game, “Any time you win the conference and win 25 games you’re doing something right.  Not everybody can end up with the season that they wanted and only one team does.  It just happened to be our time tonight.”