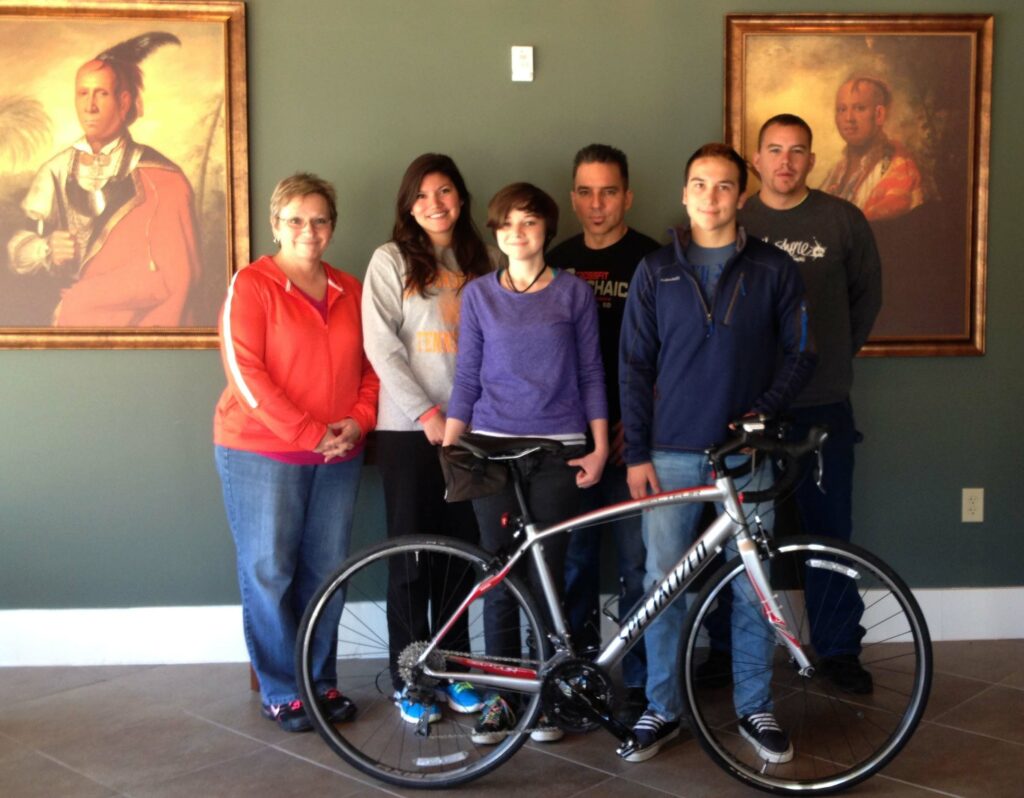 This year’s bicycle riders include Russell Bigmeat, Ty Bushyhead Boyd, Kelsey Standingdeer Owle, Katie Sneed, Richie Sneed, and Pat Watkins.  They are sponsored by the Tribe and their ride and their preparation are coordinated by Tara McCoy at Cherokee Choices. They will ride an average of 50 miles per day on the three-week trip.

The cyclists just completed three history workshops at the Museum of the Cherokee Indian, in the Ken Blankenship Education and Research Center.  The Museum is an interpretive site on the Trail of Tears National Historic Trail.

The first workshop described the history and cultural background of the Cherokees leading to the Removal.  The workshop emphasized the efforts of the Cherokee Nation to stay, including the Cherokee Phoenix newspaper and its anti-Removal editorials; speaking tours by young educated Cherokee men throughout the northeast; lobbyists and petitions in the U.S. Congress; and taking their case all the way to the U.S. Supreme Court, which ruled that the Cherokees were a sovereign nation in 1832, the basis for sovereignty today.   The second workshop looked at the routes of removal and at the specific locations they will be traveling through.  The third workshop examined the history of the Eastern Band specifically at the time of Removal and how people struggled and succeeded in their efforts to remain on their ancestral homeland.  A petition from the citizens of Aquohee, the district that included this area at the time of Removal, said: “The bones of our fathers lie here in security, and we cannot consent to abandon them to be crushed beneath the feet of strangers.”

This year’s cyclists participated in the workshops on Saturday mornings, before beginning their training ride for the day.

They enjoyed the workshops and commented, “Information covered all bases yet wasn’t boring,” and “I enjoyed learning more about my history.”

Workshops were taught by Barbara R. Duncan, Ph.D., education director at the Museum of the Cherokee Indian.  Duncan and the Museum have provided these workshops for the Trail of Tears riders for several years. For more information on the Trail of Tears National Long Distance Trail, go to www.nps.gov/trte.  For information on workshops at the Museum’s new education wing, contact bduncan@cherokeemuseum.org or 497-3481 x306.

– Musuem of the Cherokee Indian