State Senator Martin L. Nesbitt Jr. (D-Buncombe) passed away at the age of 67 from stomach cancer on Thursday, March 6.  Gov. Pat McCrory ordered all state flags to fly at half-staff in honor of Nesbitt.

Gov. McCrory stated, “Sen. Nesbitt was a dedicated public servant to the State of North Carolina.  He was a true professional in everything that he did.  We join his family in mourning his loss.”

Nesbitt was born on Sept. 25, 1946 in Asheville.  He served more than 11 terms in the North Carolina House of Representatives having been appointed in 1979 to serve out the remainder of his mother’s (Mary Cordell Nesbitt) term after her death.  In 2004, he started his ten-year stint in the North Carolina Senate as he was appointed to fill a vacancy left by Steve Metcalf following his resignation. 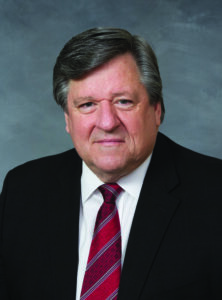 Nesbitt received his cancer diagnosis just 10 days before his death, and he stepped down from his position as leader of the North Carolina Democratic Caucus on Tuesday, March 4.

At the time of his death, Nesbitt served on the following State Senate Standing Committees:  Appropriations on Health and Human Services, Appropriations/Base Budget, Commerce, Education/Higher Education, Finance, Judiciary I, Program Evaluation, Redistricting, Rules and Operations of the Senate, and State and Local Government.

During his long tenure in the North Carolina General Assembly, he made many friends.

“Martin Nesbitt was a great friend to our people, an ally to our Tribe and a dedicated public servant to the state of North Carolina,” said Principal Chief Michell Hicks.  “His passing is a tremendous loss for our community.”

And, Nesbitt was a friend to the Eastern Band of Cherokee Indians.  During the debate in the General Assembly in May 2012 on whether to allow live table games at Harrah’s Cherokee Casino or not, Nesbitt stood by the Tribe.

He was quoted in a Native Times article stating his support of the Tribe, “It’s imperative that we do what little we can to support them and help them.”

U.S. Senator Kay Hagan (D-NC) said in a statement, “For thirty years, Martin Nesbitt has served the people of Buncombe County in the General Assembly with extraordinary dedication, and North Carolina has lost a great leader.  Martin was a fierce defender of his values, a champion for mental health, and a strong advocate for North Carolina’s children and public education system.”

She continued, “An avid racing fan, Martin helped organize the General Assembly’s ‘Pit Crew Challenge,’ and I always enjoyed being part of his team when I served in the State Senate.  I am honored to call Martin a colleague and friend, and my thoughts and prayers go out to his family and friends during this difficult time.”

North Carolina House Democratic leader Larry D. Hall commented, “I am deeply saddened to learn of Senator Nesbitt’s passing.  He was a dedicated public servant who devoted his life to the ideals he believed in.  Senator Nesbitt was a constant advocate for the community he represented and his passion, leadership and work ethic made all of North Carolina a better place.  Our thoughts and prayers are with his family, and we owe them the deepest gratitude for sharing him with our state.”

The North Carolina Democratic Party released a statement, “We, the fellow Democrats who worked with and supported Sen. Nesbitt, will continue to champion the causes for which he fought during his illustrious career, and we will incorporate his spirit into the permanent fabric of the Democratic Party.”