‘The Times They Are A-Changin’…at Cherokee Indian Hospital

Come gather ’round people
Wherever you roam
And admit that the waters
Around you have grown
And accept it that soon
You’ll be drenched to the bone.
If your time to you is worth savin’
Then you better start swimmin’
Or you’ll sink like a stone
For the times they are a-changin’.
— Bob Dylan

In  October 1980, Chief John Crowe dedicated the hospital “to the spirit of our people, those who worked before us, those who worked with us, and those children who will someday work after us.” Indian Health Service opened this facility in 1981. 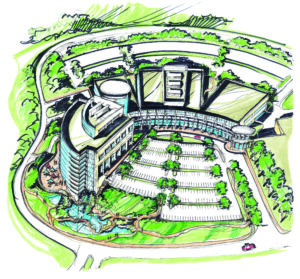 In 1981, MTV was launched; Ronald Reagan; a California actor, became president; Lady Di married Prince Charles; the Titanic wreck is found; Iran released over 50 American hostages after holding them for 444 days; artificial sweetener, aspartame, is approved by the FDA; Raiders of the Lost Ark is the top grossing film; the first combined heart-lung transplant is performed and the first American test-tube baby is born.

But the times, according to Dylan’s song, “they are a changin”.  Cherokee Hospital is changing and the next two to three years will be phenomenal. The new facility will improve parking, service delivery and change our daily routines. As a community, as a staff, as tribal leadership, are we ready? Most important, how do we get ready?

We may see change as an opportunity to evolve and grow and approach this with patience.  Change creates challenges and we must be mentally and physically ready to accept that change or as Dylan said, “sink like a stone” if we do not.

People look at change differently.  Change occurs in our life everyday and yet when we are faced with change we tend to react negatively.  If there were no change we would never see the seasons, butterflies, our children grow up, or never buy new underwear.  We change daily.

Every day we make choices. We can choose to embrace and welcome the change, consider the end product, tie an knot and hold on.  Some will choose to fight, complain, stress out, and lash out at those who create it. Which will you choose?

Consider Dylan’s words, soon we will be “drenched to the bone” in change and we’ve got to start swimming or sink.

“The times, they are a-changin'”. Are you ready?