Visiting artist Mark Hewitt to give ceramics demonstrations at WCU on Feb. 13 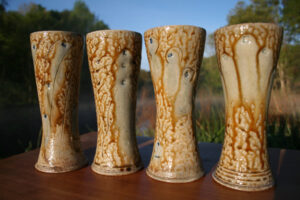 Hewitt’s visit to the WCU School of Art and Design is funded by the Randall and Susan Parrott Ward Endowed Fund for Ceramics. All events are free and open to the public.

Born in Stoke-on-Trent, England, Hewitt is the son and grandson of directors of Spode, makers of fine china. In the early 1970s, he decided to become a studio potter rather than an industrial manager and began apprenticeships with leading ceramic artists in the United States. He and his wife, Carol, moved to Pittsboro in 1983 to set up their pottery studio.

Hewitt specializes in planters and jars and uses local clays in his pieces. His work has been featured in Smithsonian magazine and on the cover of American Craft magazine. He has exhibited throughout the U.S. and in London and Tokyo.

“Mark is an Englishman who settled in a small town near Raleigh because he loves the North Carolina wood-fired ceramics tradition and, I hope he would agree, wants to be part of it. He has become one of the best-known potters in the state,” said Joan Byrd, a WCU professor of ceramics.