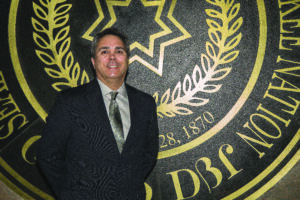 “Lumpy is widely respected by his peers and Tribal leaders, and has proven his continuous commitment to ensuring the success of the gaming business on behalf of the Eastern Band,” said Robinson.

Building a new casino is nothing new to Lambert, who helped lead the Cherokee property through a six-year $650 million dollar expansion project, which was completed in 2012. Lambert also led the implementation of traditional table games in 2012, and celebrated the record-breaking success of the resort’s first-ever World Series of Poker Circuit event in 2013

“This is a really exciting time for the residents of Cherokee County and equally exciting for members of the Eastern Band,” said Lambert.

The $110 million dollar casino will create over 900+ jobs on-site, inject up to $39 million dollars in wages into the surrounding area and will be a significant economic development project for Cherokee County and its residents. It will complement existing businesses, strengthen the local economy and create positive and sustainable change for the community. In addition to the 900+ on-site positions, the casino will bring hundreds of construction jobs to the community and is expected to spur additional retail and commercial growth.