The Smoky Mountain Roller Girls, about to enter their third year of existence, is an organization on the move…literally.  They have grown in size in the past several years and have taken on fundraising challenges for two good causes in the area. 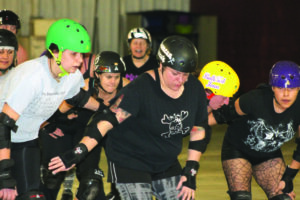 They have also added a Junior League team, known as the Lil’Nemesisters, for girls age 12-17 who are interested in roller derby.

“Our first meeting happened in March 2011, and last year was our first full season as a team and we went 8-1 in our official season, and we’re really excited about that,” said Blythe S. Winchester, MD, who is an EBCI tribal member who works as a doctor at the Cherokee Indian Hospital by day and goes by the roller derby name of “Sesamean Streak”.

“This year we are going to be playing even bigger and better teams from other states,” she said.  “We are growing our community involvement as well, and this year, at all of our home bouts, we will be raising money for the Cherokee Children’s Home and Hawthorne Heights.”

Winchester added, “Overall, with our juniors starting up, we are just really excited about expanding the opportunity for everyone to be involved in derby.  We are looking for volunteers to referee, and there are always opportunities to be involved with the team.”

The Roller Girls are based in Bryson City and practice at the Swain County Recreation Center, but they have quite a few members from Cherokee.  As a matter of fact, all of their 2014 Board of Directors are EBCI tribal members including Winchester, president; Sonya Arch, vice president; Gwynn Bird, league coordinator; and Morgan Owle-Crisp, treasurer. 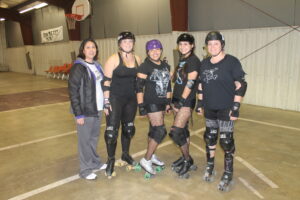 Dakota “Downtown Kota Brown” Brown, an EBCI tribal member, commented, “Initially, I got involved in roller derby because I knew a girl that did it.  I had wanted to do it for years, and I saw her in the grocery store, asked her about it, then I showed up to a practice and have been doing it ever since.  I love it.  It’s a great way to get out aggression.  My teammates have become like family.  We just have a really good time together, have fun, and we do it for a good cause.”

Mary “Natural Disaster” Smith is the coach of the Lil’Nemesisters junior team which started in August 2013.  She said the team is for skaters of all levels, “Some of them we have taught to skate.  We have gear that they can use until their parents are ready to buy their own.”

They will compete against other junior teams in the area including ones from Asheville and Balsam.  “It takes a willingness to learn and word hard,” said Smith.  “It takes being ok with falling.”

Maggie “Lil’ Miss Guided” Stephenson, a student at Mountain Discovery Charter School, “My mom rented a roller derby movie, and she wanted to try it out.  So, after coming to a few of her practices and after I turned 12, I was like ‘I’m going to join, I want to do this.’”

Laura “Shred Zeppelin” Booth, a student at Swain High, related, “I was begging Mary (Smith) to do a junior league for us, and here we are.  I like it…it’s different.  It’s just a different sport especially for here.”

Laura’s younger sister, Alana “Scarlet O’Scara” Booth, a student at Swain Middle, got involved with it through her sister and said she really enjoys it.  “It’s wicked awesome.  It’s just an incredible sport.  I’m not exactly athletic.  I can’t throw or catch or anything and here you don’t have to do that.”

Katy “Ann-E-Arkie” Shackelford, is a student at Mountain Discovery Charter School, and echoed Alana’s sentiments about it being a different type of sport opportunity.  “I like doing sports, but just on my own time.  One of the cool things is that it’s just once a week.  It’s cool and fun.”