HONORING A HERO: Bridge named in honor of Charles George

The new sign is unveiled for the bridge, which crosses the Oconaluftee River in the Yellowhill Community and connects US 441N and Acquoni Road, which was officially dedicated in honor of Pfc. Charles George on Thursday, Jan. 23. (SCOTT MCKIE B.P./One Feather photos)

A local bridge has been named in honor of one of the greatest American Indian military heroes of all time.  Pfc. Charles George, an EBCI tribal member from the Birdtown Community, gave his life on the night of Nov. 30, 1952 near Songnee-dong, Korea by jumping on a live grenade thereby saving several of his comrades at the expense of his own life.  That heroic act earned him the Medal of Honor, the highest military honor bestowed upon soldiers in the U.S. Armed Forces.

The bridge, which crosses the Oconaluftee River in the Yellowhill Community and connects US 441N and Acquoni Road, was officially dedicated on Thursday, Jan. 23.  Tribal Council approved a resolution several years ago that gave approval to name the bridge after George.  That legislation was submitted by kindergarten and first grade students at New Kituwah Language Academy.

A dedication ceremony was held at the Cherokee Indian Fairgrounds and subsequently the bridge itself on the chilly morning of Thursday, Jan. 23.  The ceremony was hosted by New Kituwah Academy and the Steve Youngdeer American Legion Post 143.

“This is an historic day,” said Warren Dupree, Post 143 service officer. “We are not only honoring a national hero, but a tribal treasure.”

Later in the program, Dupree read the Medal of Honor citation for George the full text of which can be found online at: https://www.history.army.mil/html/moh/koreawar.html.

Renissa McLaughlin, Kituwah Preservation and Education Program manager, thanked everyone in attendance and said the students at New Kituwah were moved to honor George following a veteran’s event at the school several years ago.

“We chose to honor a true Cherokee hero, Pfc. Charles George,” she said.  “Today, we commend the sacrifice and dedication of Charles George.” 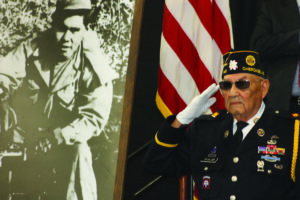 WWII veteran Reuben Taylor salutes during the singing of the National Anthem beside a photo of Pfc. Charles George that was display at Thursday’s event.

Vice Chief Larry Blythe said when thinking about George he thought about Bible Verse John 15:13 which states, “Greater love hath no man than this, that a man lay down his life for his friends.”

He related that over 1.9 million Americans served in the Korean War and that almost 37,000 died with an additional 8,000 still missing in action.

George, a member of U.S. Army Company C 179th Infantry Regiment, was one of 137 Medal of Honor recipients in the Korean War according to the Congressional Medal of Honor Society (CMOHS).

Post 143 Commander Lew Harding stated, “We are deeply, deeply appreciative and honored by his service.”  He also thanked the New Kituwah Academy Parent Association and students, Tribal Council, the EBCI Executive Offices, and NCDOT for their help in the naming of the bridge. 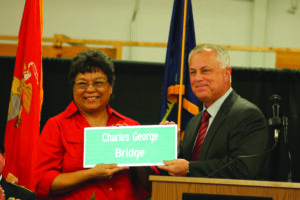 Tony Tata, N.C. Department of Transportation Secretary, is a retired Brigadier General with the U.S. Army.  “For me, as a solder and a combat veteran and having had a soldier under my command in Afghanistan receive the Medal of Honor, I know what this means to this community and the George family.”

He went on to say, “There’s no more act of selfless service than throwing yourself on a grenade.  When I saw this come into the (State) Road Naming Committee, it was a very quick discussion and a very quick and unanimous vote.  From now on, all who cross this bridge will be reminded of his sacrifice, selfless service and dedication.”

Students from New Kituwah Academy sing the Cherokee National Anthem prior to the unveiling of the new bridge sign.

Following the main portion of the event, all in attendance walked to the bridge for the official unveiling of the new sign which was done by Patty Buchanan, George’s niece.  Just prior to the unveiling, students from the New Kituwah Academy sang the Cherokee National Anthem.