Upon returning to Cherokee from a business trip late one evening last summer, my girlfriend gave me a small box wrapped in simple white paper.  Expecting a book or some other ordinary gift I opened it without much thought.  Inside, I discovered only a smooth white plastic stick laid neatly on a piece of cotton.  Printed on one end were three purple letters “EPT”.  It took me a moment to snap.

Brooke and I had been trying to conceive for nearly a year and were almost to the point of worry.  We were thrilled beyond words, but decided to keep quiet for a few months, happily sharing our little secret from family and friends.

Two weeks later, I received an email from a retired nurse I know in Albuquerque who had worked with my late father many years ago while he completed a residency in obstetrics and gynecology.  A former colleague had sent an old photo of him which she wanted to forward.  My dad died young, still in his thirties, but one accomplishment that I’m especially proud of is that he was the first Pueblo Indian medical doctor.  Another is that he delivered me when I was born. 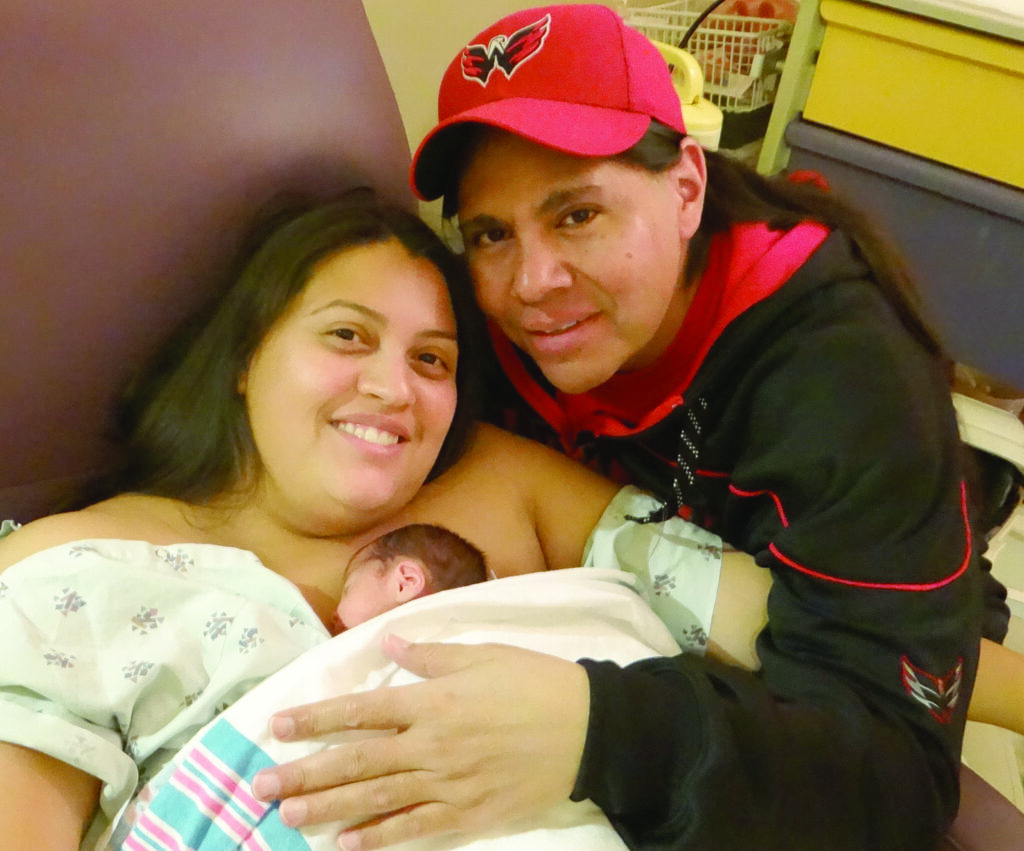 The picture was one I had never seen before, taken while my dad was on call wearing scrubs, a neck tie, and a warm smile.  I was awestruck by the timing instantly thinking to myself: “He knows.  He knows and he is happy”.

But, there was something more.  A closer look at the scanned image on my phone revealed a handsome young doctor leaning casually against a desk. Hands folded on his lap, the man exuded a calm, cool confidence. It seemed almost as though he was reassuring Brooke and I that he would be there for our family just as he had been there for his family more than 40 years ago.

Our daughter was due March 8.  On New Year’s Eve, I drove Brooke to the OB in Sylva for a routine afternoon appointment.  Along the way, we made plans for a relaxing evening at home watching the ball drop and munching popcorn.  Little did we know what New Year’s 2014 had in store.

We were told in December that our pregnancy might not go full term; nothing incredibly alarming just an issue with Brooke’s blood pressure that might require induction of labor a few weeks early.  She was monitored closely though and the condition was under control.

But, in Sylva we learned things had changed.  For although she felt fine, Brooke’s blood pressure had now become dangerously elevated, creating a serious condition in pregnancy known as preeclampsia.  Left unchecked the illness poses tremendous risks to mother and baby possibly resulting in seizures, cerebral hemorrhage, even death.

Brooke was admitted to Harris Regional Hospital for observation at 4 pm.  Doctors explained that if they could get her blood pressure under control she could probably go home the next morning.  But, after three hours of bed rest and medication with no effect, Brooke was taken to Mission Memorial Hospital in Asheville, western North Carolina’s only neonatal intensive care unit.  Here, doctors again tried to curb her blood pressure which had spiked even more during the ambulance ride.  At 11:30pm, blood pressure still soaring, we were told the baby needed to be delivered immediately.  By this time, Brooke’s sisters had arrived from Cherokee.  Brooke’s parents were three states away on business, unable to make it home on such short notice but calling every few minutes for updates.

A team of medical staff descended upon us.  They explained the procedure and its risks, and began preparing Brooke for surgery.  At one point an anesthesia tech shook my hand and wished me Happy New Year.  I glanced at a clock on the wall. The time was 12:10 am. We were given a few minutes to pray as a family before Brooke was wheeled away to the delivery room.

We welcomed our beautiful daughter, Celeste Shawna Spruce, into the world at 1:12 am on New Year’s Day.  The delivery went extremely well for both mother and baby.  Born nine and-a-half weeks premature, a nurse described our baby girl as “tiny, but mighty”.

I was told by a number of people “You’ll cry the first time you see your newborn child.  All men do.”  But, I didn’t.  Not in the delivery room, not following the nurses to the NICU, not later watching her sleep safely in an isolette, a tangle of small wires and tubes keeping her fragile body alive.

At 8am, Brooke was moved downstairs from Labor and Delivery to the Mother Baby Floor.  Along the way nurses made a brief stop in the NICU so that Brooke could hold our baby for the first time.  As I watched her finally take her newborn daughter, squirming and sobbing, into her arms and tenderly kiss her delicate round nose, I felt a tear roll down my cheek.

After that things are pretty much a blur.  I remember later that afternoon reporters stopping by the hospital to interview the proud, but exhausted parents of the New Year’s Baby.  The following morning Brooke’s parents met their first grandchild, driving eighteen hours through a vicious cold snap along the way.

Nearly two weeks later and our young daughter is doing amazingly well.  She’s breathing unassisted, taking more food each day, and we’re hoping she’ll be home in time for Valentine’s Day.  Doctors are also confident she will grow into a perfectly healthy and happy child.

Moreover, Brooke is making a full recovery too.  Meanwhile, it’s interesting to note that Brooke herself was a preemie baby. A fact I’m reminded of every Nov. 17, World Prematurity Day, when Brooke makes sure I wear something purple.  Born at 28 weeks, she weighed a mere one pound and eleven ounces.  Even more ironic, she spent two and a half months in the very same Asheville NICU as our daughter.  We even had the opportunity to meet one of the doctors who cared for her 30 years ago and still works at Mission today.  I think I’ll start wearing extra purple in November from now on.

In closing, Celeste, Brooke, and I would very much like to acknowledge all of our friends and family who have shown such a huge outpouring of love and support though out our ordeal.  The entire staff at Mission Hospital has been wonderful along with our primary care doctors at Smokey Mountain OB and of course the great people at Cherokee Indian Hospital.  I’d also personally like to thank the entire community of Cherokee, North Carolina.  I first came here five years ago for my work, never imagining that Cherokee would become my home.  Since that time, I’ve made countless friends, shared many priceless experiences, and been privileged to serve such a remarkable and outstanding nation of people. Brooke and I now look forward to raising a strong Native woman who will represent her Eastern Band people here and the Laguna Pueblo, where I am from, with dignity, self-respect, and character.