The Cherokee Children’s Home was established in 1969 and has been the permanent or temporary home for over 1,700 Cherokee youth over the years.  Currently, a new $2.6 million facility is being built on 28 acres located on Goose Creek Road in the Birdtown Community. 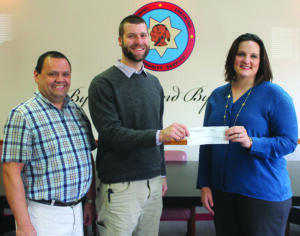 The Cherokee Preservation Foundation gave a $200,000 donation to the Home on Tuesday, Jan. 14.  The Cherokee Boys Club has raised over $200,000 in the past year, and Tuesday’s donation represents a match of that amount.

“We are interested in the green components of the project, the LEED-certified components that are going in and also the fundraising capacity-building for the organization,” said Annette Saunooke Clapsaddle, Cherokee Preservation Foundation executive director.  “We did a $40,000 grant on the front to help them with the planning and the green components they are using.”

“We gave them $200,000 for the green energy components, and then once they started their campaign and raised well over $200,000, that’s the match for the amount we agreed to match.”

Cris Weatherford, Cherokee Children’s Home director, related, “The first phase of our project is building the first house which includes our administrative space as well as space for all of the children and staff.  It is a little over 8,000 square foot, and it’s going to include all of that plus a basement which will be the recreational space for the kids.  That’s about a $1.2 million project so this donation takes a large bite out of that.”

He said the existing facility is around 3,500 square feet and was constructed pre-building code and pre-licensing code.  “It’ll be nice to have a new facility.”

The new facility will consist of two cottages, each with nine beds and other amenities.

Lambert said the contract for the construction of the new Home is 285 days with some extra days built in for adverse weather, but he said he has no doubt the facility will be finished in under a year.