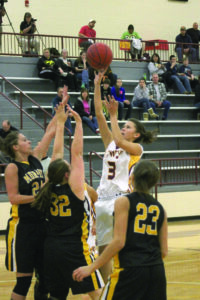 This game started out close with Cherokee leading 20-18 after the first period, but the second period was a completely different game and story as the Lady Braves really put the pressure on defensively.  They outscored the Lady Bulldogs 26-7 to take a 46-25 lead into the locker room.  It was all Cherokee in the second half as they breezed for the big 79-46 win.

Cherokee’s Blake Wachacha (#15) plays hard defense in the second half of Friday’s game against Murphy.

Kendall Toineeta and Avery Mintz led the team with 19pts each followed by Le Le Lossiah with 14.  Mintz also added 6 rebounds and 4 assists.

The Braves also had a relatively close start to this game as they led 24-15 after the first period.  Like the girl’s game, the Braves had a huge second period outscoring the Bulldogs 30-9 to take a 30pt lead into the locker room.

They kept the pressure on during the second half outscoring Murphy 26-14 in the third period to take the big win.

Stats were not available for the Murphy boys.

Meghan McQuade scored 32pts to lead the undefeated Lady Yellow Jackets in their win.  She is leading all of western North Carolina with 23.2pts/game.

Hayesville led 18-5 after the first period and took a 27-18 lead into the locker room.  The second half was relatively close with the Lady Yellow Jackets edging Cherokee 14-12 in the third period and both tying up at 16 each in the fourth.

Hayesville took an early nine point lead after the first period (25-16), but the Braves came back and only trailed 41-36 at the half.  Hayesville outscored Cherokee by three in the second half to take the 8pt win.