It may not have been as cold as International Falls, Minn., but Cherokee and the surrounding area was hit with bitterly cold weather starting on Sunday, Jan. 5.  Temperatures dipped below zero on many parts of the Cherokee Indian Reservation causing pipes to freeze and power to go out in places. 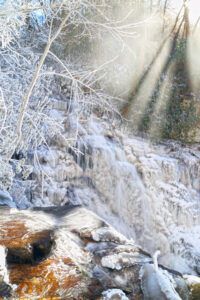 According to weather.com, the lowest temperature ever recorded in Cherokee was -23 degrees Fahrenheit in 1985.

She said the Women’s and Children’s Center has had problems since Dec. 25, 2013 and that the sheetrock is being replaced and they are currently waiting on the tile to come in.  She said an evaluation of all tribal buildings has taken place to check on damages.

“We know we have a lot of damage out there,” said Owle.

Jody Bradley, Cherokee Indian Hospital, said the pipes froze at the Snowbird Clinic and it might be closed for several months.  She related that the Pediatrics program at the Beloved Women’s and Children’s Center should be back in operation in about two weeks.

“I think we learned some lessons from this, and I think we need to prepare better next time,” said Big Cove Rep. Perry Shell.  “It hasn’t been this cold in years.”

Polly Castorena, CDOT, related, “CDOT scraped and salted BIA and Tribal roads as needed and scraped gravel roads as well as placed chat as needed.  CDOT also ensured that driveways for dialysis patients were cleared of ice so patients could make their appointments.”

She said that CDOT responded to many calls of icy driveways, parking lots and secondary roads as well as fallen trees on roadways.

Castorena said no roads were damaged as a result of the severe weather.