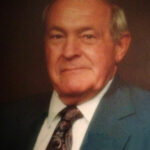 A native of Haywood County he was the son of the late Robert Glenn Hipps and Leila Wright Hipps of Lake Junaluska.  He was also preceded in death by a son, Brian C. Hipps.  Joe was a 1951 graduate of Waynesville Township High School and also a graduate of Western Carolina University.  He taught and coached for ten years in High Point and Durham and during the summers, served as Theater Manager for “Unto These Hills” in Cherokee.  He then began his Federal government career of more than 26 years with the Department of the Interior, serving with the National Park Service at the Oconaluftee Job Corps Conservation Center in Cherokee and Harpers Ferry, WV; youth programs in Washington, DC; and the Bureau of Reclamation, Director of Youth Programs in Washington, DC and Denver, Colo.  Joe retired in 1990 and resided in Lake Junaluska until May 2012 when he moved to Raleigh.

A memorial service will be held at 2p.m. on Saturday, Jan. 11 at Long’s Chapel United Methodist Church with Reverend Dr. Charles W. Wilson, II officiating. The family will receive friends from 12:30-1:45 p.m. prior to the service at the church.

An on-line memorial register is available at “Obituaries” at “www.wellsfuneralhome.com”