Blankenship retires from Museum after 28 years

MUSEUM OF THE CHEROKEE INDIAN

Friends, family, and colleagues gathered on the occasion of Ken Blankenship’s retirement, at the Museum of the Cherokee Indian, on Friday, Dec. 27, 2013 for refreshments and a reception.

The program began with an invocation by EBCI Beloved Man Jerry Wolfe who also presented Blankenship with a set of his hand-carved stickball sticks. 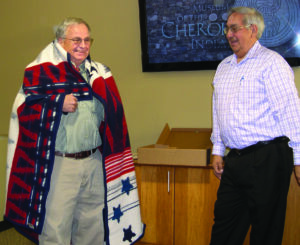 Robert Blankenship, chairman of the Museum Board, made remarks and told stories about growing up with Ken.  “Ken came to this position not as a job, but as a mission… He realized that operations such as this museum, Qualla Co-op, Junaluska Museum, Sequoyah Birthplace Museum, Unto These Hills, the Indian Village, were the heart and soul of the tribe.  It’s the things that hold us together and makes us be something that’s not just another government.  We’re an Indian tribe, and a government, and a corporation.”

“Ken took it on as his responsibility to save and preserve every bit of our history culture and traditions as possible. Ken’s very small staff  were so indoctrinated.  And, I’m amazed every day at the amount of programming, educational activities, and work to preserve our records is accomplished by this small staff. They work at it as their mission too, and not just a job.

Robert Blankenship continued, “It’s pretty obvious that this facility and its programs are unequaled in Indian country, in the United States…Ken fixed the roof, got our cash in a healthy surplus, and expanded facilities and programming at every opportunity.  So Ken is leaving his mission for now, but is leaving his staff and the new director, Mr. Bo Taylor, who will carry on the mission. He knows our people, and our ancestors, deserve no less.”

Barbara R. Duncan shared “The Wisdom of Ken,” sayings collected from Ken over the years, including, “If you don’t keep moving forward, you’re standing still,” and “I love cash flow.”

Wilbur Paul presented Ken Blankenship with gifts on behalf of the Board and staff, including a Pendleton blanket, beaded ball sticks, and a shell gorget with the Museum logo of the water spider bringing fire.  Qualla Arts and Crafts gave Ken Blankenship gifts for fishing and camping.

James Bo Taylor, the new executive director of the Museum of the Cherokee Indian, shared a slide show of photos of Ken Blankenship and shared his appreciation.  “This wing that has his name on it will forever endure, but I know he will do more great things.  I don’t see him sitting on the porch!”

Big Cove Rep. Perry Shell spoke on behalf of himself and the Eastern Band of Cherokee Indians, in appreciation of the work Ken has done for the Museum and the tribe.

Ken Blankenship has been Executive Director at the Museum of the Cherokee Indian for twenty-eight years.  He was born and raised in the Big Cove community, where he attended the Big Cove Day School, followed by Cherokee High School.  He joined the U.S. Army where he became an aviation mechanic, and served one tour in Vietnam.

When he returned home, he completed a two-year associate’s degree in business. At the Cherokee Boys Club, he worked in their training program, taught job skills, and supervised the construction of the new Museum of the Cherokee Indian building in 1976, and the new Sequoyah Birthplace Museum building in Vonore, Tenn.

He became director at the Museum of the Cherokee Indian in 1985.  By presidential appointment, he served on the board of the Institute for American Indian Arts in Santa Fe for fifteen years, including three years as director, and he led that institution to national prominence. He was elected to the Swain County School Board and has served on numerous other boards including the America Association for State and Local History, Southern Highlands Attractions, and the North Carolina Folklife Institute.

He has been a consultant for the Ford Foundation on non-profit leadership using a business model.  He has received awards from the Governor’s Council of North Carolina for Business Leadership, Southwestern Community College, and more.  During his time as director, the Museum of the Cherokee Indian received the National Association for Interpretation Award, the  Preserve America Presidential Award for its work on the Cherokee Heritage Trails project, the Moutain Heritage Award, the North Carolina Folklife Society Community Traditions Award and more.  He and his wife Barbara live near Cherokee and have two children and six grandchildren.