The USET Board of Directors held its annual Business Meeting on Thursday, Oct. 31 at the Harrah’s Cherokee Resort Event Center.  The Board passed 23 resolutions on many topics ranging from Indian gaming to health care. 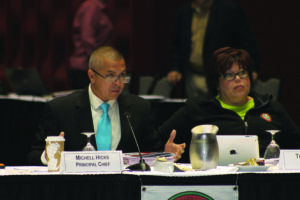 Principal Chief Michell Hicks opened the meeting with a few words and then asked for a moment of silence in honor of the passing of former Vice Chief Bill Ledford.

One of the most talked-about items of the day was Resolution 015 titled “Calling on the National Football League to End the Use of the Washington, D.C. racially-offensive slur Team Mascot Name” which was submitted by the Oneida Indian Nation.

Chief Hicks commented, “Obviously, the Redskins is a different scenario and it pulls at the heart.  I just don’t want it to be taken too far.”

He related that names such as Braves and Warriors can be used with respect, and he asked if anyone had thought of a suggestion for a new name.

USET president Brian Patterson said, “This resolution is only to address the derogatory and racist name of redskins.  The name is a racist name.  It is offensive.  It is an epithet, and it has no place in America today.”

Phyllis J. Anderson, Chief of the Mississippi Band of Choctaw Indians, gave another side.  “Some people take pride in being called a redskin.”

She said many in her tribe see nothing wrong with the term, “I have mixed feelings about this.”

USET executive director Kitcki Carroll (left) looks over a resolution as USET vice president Randy Noka reads part of it during a discussion on Thursday. Both can be seen taking a departure from their usual business suit attire to pay homage to the Boston Red Sox who won the World Series the night before.

Chief Anderson said the word Oklahoma means “red people” in the Choctaw language.  “Have we gone to listen to other Natives to see how they feel about it?”

USET secretary Brenda Lintinger related, “As Native Americans, I do think we’ve been late to the civil rights game, and I think we do need to take a stand.”

Other resolution passed during Thursday’s meeting include: