Newly elected NCAI president Brian Cladoosby visited Cherokee on Thursday, Oct. 31 and addressed the USET Board of Directors at the Annual Meeting at Harrah’s Cherokee Resort Event Center.  USET is the first intertribal organization Cladoosby has visited since being elected earlier this month.

“The foundation that your elders laid for you in 1968…this is what they dreamed of,” said Cladoosby.

“You will have your differences, but what family doesn’t have their dysfunctions,” he said jokingly.

Cladoosby also said it is important to keep telling the story to everyone in Washington.  “An elder told me to take duct tape with me when I go to Washington to put tape over one of their ears so it doesn’t go in one and out the other.”

Cladoosby served on the Swinomish Tribal Council for 29 years prior to his election as NCAI president.  “Just about my entire adult life, I’ve been in tribal politics and I’ve seen the good, the bad, and the ugly.”

But, he remains optimistic. 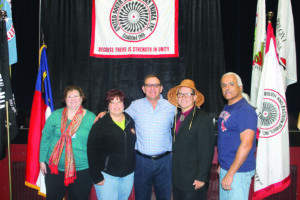 “We have a golden opportunity in the next three years to put pressure on this administration (President Obama) to help Indian Country.  This administration is second-to-none as far as getting things done for tribes on the ground.”

One issue all of Indian Country is keeping an eye on is the gaming rights case of Michigan v. Bay Mills Indian Community where the state is taking legal action against the tribe who opened an off-reservation casino in the Upper Peninsula area.

“That (case) is very, very scary for everyone in this room,” said Cladoosby.  “If this goes to the Supreme Court, I have a terrible feeling that sovereign immunity will be impacted for years to come.  The Department of Interior needs to take leadership on this issue.”

In speaking on federal budget issues, he related, “As you know, our IHS budget lost a quarter of a billion dollars because of sequestration…there is a lot of finger-pointing and that is unacceptable.”

He told USET tribal leaders that he wants to be accessible to their needs and that it is important for tribes to stick together and utilize groups such as USET.  “Our tribes have been here since time immemorial.”

Following his address, Cladoosby was given a tour of the Cherokee Indian Reservation by Chairwoman Terri Henry.