Many issues discussed at USET

The USET Annual Meeting is a time for the member tribes and leaders to come together to discuss pressing issues for each tribe as well as Indian Country as a whole.  Many issues were discussed  during the meeting ranging from domestic violence to diabetes to self-determination.  Many of these issues were discussed in a series of presentations on Wednesday, Oct. 30. 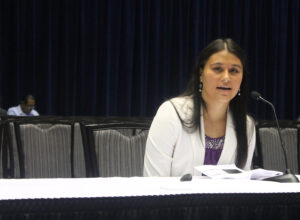 She said IHS enjoys its partnerships with USET and that they continue working hard even through some hardships.  “We have certainly had our setbacks this year with the sequester and the government shutdown.”

Ketcher related that sequester cuts totaled $7 million for tribes in the IHS Nashville Area.  She said despite the cuts, “We continue to improve and reform.  We have all worked together to improve and expand our services.”

She spoke of several successes including reducing the IHS hiring time from 80 days to 66 days in order to more fully staff area clinics as well as a recent joint collaboration for a new facility for the Mississippi Band of Choctaw Indians.

Hiawatha Brown, Narragansett Tribe of Rhode Island Tribal Council representative, praised the IHS, “I want to thank IHS for their continued support of the Narragansett.  We finally broke ground on our new facility after nine years.”

He said construction actually started on Oct. 9.  “Everything is done within the bounds of the reservation.  We thank you for your continued diligence and work.”

Ketcher said she and her staff encourage tribal leaders to contact them with thoughts and comments.  “I learn from you.  I need to hear what we need to work on.”

“That program has really improved our community health at the local level,” said Sabattus who related that the funding for the program is set to expire in September 2014. 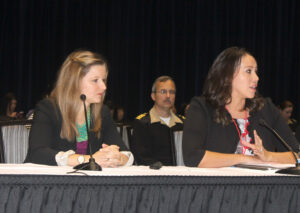 She said proponents are asking for an additional $250 million and five years of funding, but that they may have to settle for less.  “We just want the program reauthorized…we just do not want to see those critical funds go away.”

Shuy added, “As the budgets are so difficult right now, we are just asking for the program to be renewed even if it is as the $150 million level.”

She told USET attendees of the need to seek Congressional help in the reauthorization process.  A total of 336 House representatives and 76 Senators signed a recent Congressional support letter.  “We’re hopeful that this year we can get this through Congress and keep the program stable.”

He related that when he started a Child Support Tribal Consortium with the Chickasaw Nation of Oklahoma in 1997, they collected a total of $20,000 that first year.  Since then, they have collected over $83 million.

“This is $83 million that children would never have received,” said Sweet.  “These are families, our friends who need help.”

Sweet said that in its first year, the EBCI has had over 200 TANF (Temporary Assistance for Needy Families) cases and that the Tribe’s child support program has collected over $3 million.

“We are becoming the voice of our children.”

One issue that is always a big topic in Indian Country is domestic violence.  Tribal Council Chairwoman Terri Henry gave a presentation on the VAWA 2013 implementation and 2018 organization strategy along with Jane Root, domestic and sexual violence advocacy center of the Houlton Band of Maliseet Indians of Maine, and Alabama-Coushatta Tribe of Texas Tribal Council Vice Chairwoman Nita Battise.

“We just had the reauthorization of the VAWA and we have had a tremendous victory with the jurisdiction issues,” said Chairwoman Henry.  “This is four decades of work and organizing.” 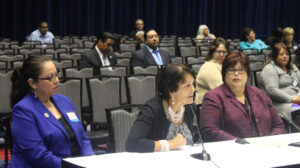 She said it is important for all Tribes, especially those in USET, to work together.  “We need, as we move forward, to go with a unified voice.  I think that USET has been out front and a leader on this issue for several years now.”

Chairwoman Henry told attendees of a government-to-government consultation on the VAWA that will be held in Washington, DC on Nov. 14.  She said it is important for all Tribes to become active  and work as hard as possible for the implementation especially on the new jurisdiction issues.

“With the special jurisdiction comes an extra amount of responsibility,” she commented.  “What’s important about this is that we get it right.  Certainly, we want to protect our people, but we also want to avoid challenges in the Supreme Court.”

Battise told of her personal challenges with domestic violence.  “There are indeed faces and personal stories behind VAWA.”

“We understand that our kids are no longer just the recipients of the ‘big check’,” said Clapsaddle.  “They are potential investors in many levels of investment.”

She told of the various program the Foundation has funded on this issue including the following:

“There are certainly opportunities for individual investment for our youth,” she said.  “Most interesting to the Foundation is the opportunity for entrepreneurial investment.”

Principal Chief Michell Hicks commented, “For any Tribe that does a Minor’s Fund distribution…one of the biggest issues is the tax effect.”

Kim Peone, EBCI Deputy Financial Officer, related, “The EBCI is now looking at a staggered distribution for our youth.  On a $200,000 distribution, the immediate savings to the child would be $25,000.”

USET Secretary Brenda Lintinger manages the Minor’s Fund for the Tunica-Biloxi Tribe of Louisiana and told of her Tribe’s issues with distributions.  “We found it more advantageous to tax as we go.”

She said their Minor’s Fund is set up in a way that the children technically own their money from the start.  Lintinger also related that they face many of the same challenges other tribes face when trying to educate their youth on money management.

“These young people need to learn that you have to work to get things in this life,” she noted.  “If they know that they’ll get a large lump sum check, that can be problematic at times.”

Following Clapsaddle, Sheena Kanott, Cherokee Choices manager, told the attendees of her program which is going on its thirteenth year of service to the Cherokee community.

“We are a community-based, participatory program really involving the community in everything that we do with the program,” said Kanott who added that the goals are to reduce rates of obesity and type II diabetes with in the population of the Eastern Band of Cherokee Indians.

She ended her presentation with a short film entitled “Iya” which tells about the role of traditional Cherokee foods in diabetes prevention from the standpoint of a pumpkin.