As of Friday, Nov. 1, Cherokee Phoenix Theatre will be a six-screen cinema; an expansion of four additional screens from the original two that opened in July of 2008. The state-of-the-art cinema now has over 900 seats, as well as the latest cinema technology. All of the new auditoriums and the original ones feature all stadium seating with plush, high-back rocking theatre seats and cupholder armrests. Movies are presented with digital surround sound and all digital projection on wall-to-wall screens. Select features are also presented in digital 3-D. 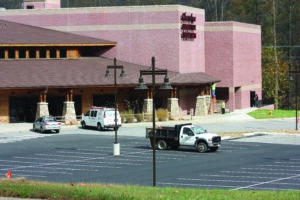 Workers put the final touches on the expansion of the Cherokee Phoenix Theaters on the afternoon of Tuesday, Oct. 29. The theater will open to six screens on Friday, Nov. 1. (JEAN JONES/One Feather)

“Cherokee Phoenix Theatre has become a great community cinema since opening in 2008. With the expansion to 6 screens, the theatre can offer a wider selection of movies and play movies longer,” said Phil Zacheretti, Phoenix Big Cinemas’ president.  “The cinema will now be the Hollywood movie entertainment destination for Cherokee, Bryson City, Sylva, Waynesville and other surrounding areas.”

Jason Lambert, EBCI Commerce Division director, commented, “We are excited to be able to provide this to our community and region.  This expansion began as a community effort, and the result is the best entertainment facility west of Asheville.”

* Community Day: Buy one ticket, get one FREE after 6pm on Tuesday, Nov. 5. For each regular ticket purchased, a guest will receive a second ticket to the same show for a companion for free!

and more to be announced