FLETCHER –  Several business, civic, and educational leaders from across Western North Carolina were sworn in recently as new members of the AdvantageWest Board of Directors. Among them was Jason D. Lambert, an EBCI tribal member and director of the Division of Commerce for the Eastern Band of Cherokee Indians, appointed by the president pro tempore of the N.C. Senate. 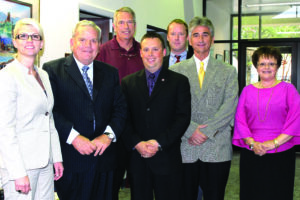 Among the new appointees to the AdvantageWest Board of Directors are (left-right) front – Terri King and Bruce Goforth, both of Buncombe County; Jason D. Lambert, director of the division of commerce for the Eastern Band of Cherokee Indians; Tommy Sofield, of Watauga County; Pam Moody, of Graham County; back row – John Boyd, of Mitchell County; Tim Ferris, of Rutherford County. AdvantageWest is the regional economic development partnership serving the 23 westernmost counties of the state, including the Qualla Boundary. (Photo courtesy of Advantage West)

AdvantageWest is the regional economic development partnership serving the 23 westernmost counties of the state, including the Qualla Boundary. The nonprofit organization’s program of work focuses on advanced manufacturing, entrepreneurship, the film industry, the green-tech and clean-energy economy, and agribusiness, to include the Blue Ridge Food Ventures food and natural products business incubator. AdvantageWest is headquartered adjacent to the Asheville Regional Airport at the center of the organization’s 10,000-square-mile service area.

Among its initiatives is the Certified Entrepreneurial Community® program, the first of its type in the country, developed by AdvantageWest to recognizecommunities as “entrepreneur ready.” The Eastern Band of Cherokee Indians is one of 10 communities in Western North Carolina that engaged in the rigorous five-step process, winning CEC designation in 2009.

The Board of Directors set AdvantageWest policy and programmatic priorities, adopt the annual budget of the corporation, and develop strategies for growth by engaging in long-range and strategic planning on behalf of the corporation. Directors assist in promoting economic development by working with fellow Board members and staff on activities that support the recruitment and retention of business and job growth in the service region. Members of the board of directors are appointed by the governor, lieutenant governor, speaker of the N.C. House of Representatives, and the president pro tempore of the N.C. Senate.

Along with Lambert, the other new appointees to the AdvantageWest Board of Directors are:

·        Bruce Goforth, of Buncombe County, former member of the N.C. House representing the 115th District for nearly four terms, and founder and president of the general contracting company Goforth Builders in Asheville

Officers and other members of the Board of Directors are: