KESHENA, Wisc. – EBCI tribal member and College of Menominee Nation sophomore Nakoa Chiltoskie, from Cherokee, is the recipient of an Adolf Van Pelt Scholarship in the amount of $1,500.   The scholarship is one program of the Association of American Indian Affairs (AAIA), an organization which began in 1922 to help a group of Pueblo protect land rights. 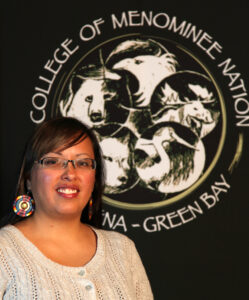 Nakoa Chiltoskie, from Cherokee, is the recipient of an Adolf Van Pelt Scholarship in the amount of $1500. (Photo courtesy of CMN by D.Kakkak)

Chiltoskie plans to finish her associate’s degree in Early Childhood/Elementary Education and continue in the CMN bachelor’s Degree program in teacher education.

Bertha Pfersich Van Pelt created a foundation in 1973 to memorialize her only son, Adolf, who had come to the United States from Holland after WWII. After attending college here, he became a mechanical engineer. He died from cancer at age 47. His mother returned to Holland after his death and decided to help American Indians, who she felt were truly “American.” In 1987, AAIA was contracted to manage the Adolf Van Pelt Scholarship. Over the past 10 years, AAIA has awarded 145 scholarships to graduate and undergraduate native students.

The College of Menominee Nation is an accredited tribal college with campuses in Keshena, Wisconsin on the Menominee Reservation and also in the neighboring City of Green Bay.  The College enrolls about 750 undergraduates in Bachelor’s Degree and Associate Degree programs, as well as technical and trades diploma programs.  In 2013, the College is celebrating its 20th anniversary year.

– The College of Menominee Nation