SYLVA – Heritage Christian Academy (HCA) announced on Monday, Oct. 21 that the winner of the school’s mascot search competition is EBCI tribal member Isabella Saunooke, a 7th grader at the school.  Middle school students were recently invited to submit an essay and image of a proposed mascot that would best represent the mission and vision of HCA. Fifth through seventh graders submitted sealed entries that were evaluated by a selection committee made of one teacher and two parents. 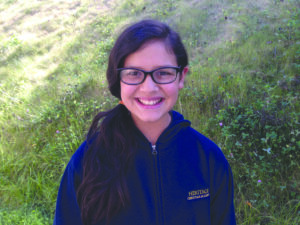 “We were looking for a mascot to be a character ambassador for our school,” said Mike Rogers, HCA School Administrator.  “Students were encouraged to develop a concept and correlate it with scripture that was meaningful to them personally, but that also support our core values.”

Saunooke’s essay cited Proverbs 28:1 – “The wicked flee when no one pursues, but the righteous are as bold as a lion.  the lion would be a good example to other schools and our community to show our courage for Christ.  The lion is strong, determined, as well as protective.”

She was recognized for her winning entry and awarded a HCA logo’d hoodie.  Saunooke is the daughter of Brandon and Cynthia Saunooke, and sister to Graham, Phillip and Ava.  The Saunooke family resides in Sylva.