MURPHY – A project many years in the making officially got underway on Tuesday, Oct. 15 as ground was broken for the Harrah’s Cherokee Valley River Casino & Hotel in Cherokee County.  The $110 million project will include 60,000 square feet of gaming space, a 300-room hotel and several dining options. 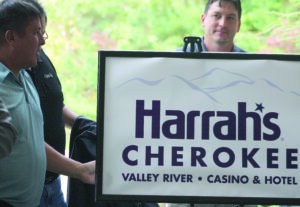 “We find priorities and we invest in them,” said Principal Chief Michell Hicks.  “The name of Cherokee is proud today.”

He thanked all of the present and past Tribal Council representatives who have worked on the project over the years as well as the TCGE Board, Tribal Gaming Commission, Harrah’s Cherokee employees, and the various state and area businesses and organizations who have partnered with the Tribe.

He also spoke of the financial stability of the Tribe, “When we first did the casino, there was no way we could have borrowed $82 million, but today, we can do it.”

Vice Chief Larry Blythe commented, “A lot of work and effort has gone into where we are today.” 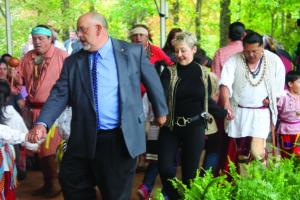 “As we move forward on this project…a lot of prayers will have to be put up,” said Vice Chief Blythe.  “We need the Lord’s guidance on this project.  We know there will be many obstacles to overcome, but if we keep our faith in God, we know he will help us through it.”

Brooks Robinson, Harrah’s Cherokee senior vice president and general manager, commented, “For many years now, we at Caesar’s, have enjoyed a great partnership with the Eastern Band of Cherokee Indians.  This project will have a sweeping impact, not just on Cherokee County, but all of western North Carolina and parts of Georgia and Tennessee.”

He added, “I would like to thank the Tribe for their willingness to invest $110 million on this project.  They are investing in our future and theirs.” 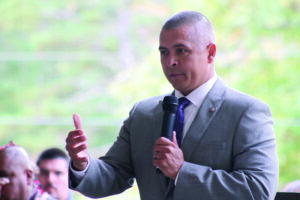 Scott Barber, senior vice president and general manager Caesar’s Entertainment, noted, “It’s remarkable to see the transformation of this Tribe over the past 15 years.”

He said the new facility will help provide jobs to an area riddled with unemployment.  “We will be providing employment; not just jobs, but careers that pay very well.  This facility is going to continue to raise the bar, not just for western North Carolina, but for the gaming industry.”

Information from Harrah’s Cherokee officials relates that the Valley River Casino & Hotel will create over 900 jobs. 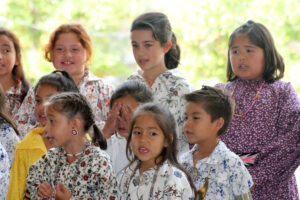 Members of the New Kituwah Academy Choir sing a song in the Cherokee language.

The New Kituwah Academy Choir and Dancers performed during Tuesday’s event as did the Warriors of Anikituwah who performed the Cherokee Welcome Dance and the Cherokee Friendship Dance.

Bo Taylor, new executive director of the Museum of the Cherokee Indian and a member of the Warriors of Anikituwah, said, “It’s a great day to be a Cherokee.”

He said that it hasn’t always been easy to be a Cherokee, but the language and culture have survived through severe conditions.  “Whether we know it or not, our cultural revitalization is being fueled by casino profits.  We don’t do it (gaming) to line our pockets.  We do it to keep our culture alive.”