Cherokee Central Schools has announced the selection of their chairperson and vice-chairperson for the 2013-2015 term of office. 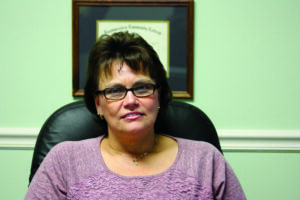 Gloria “Punkin” Griffin has been selected as vice chairperson of the Cherokee School Board for the 2013-15 term. (JEAN JONES/One Feather)

In a recent school board meeting, John D. “Dick” Crowe was selected to be the chairperson for the Board’s 2013-2015 term.  Crowe is mid-way through his first term as the Big Y Board member; he served as the vice-chairperson from 2011-2013.

Gloria Griffin was selected to be the vice-chairperson for the Board.  Griffin took the oath of office for her second term during the Inauguration ceremony of Tribal Council at the Joyce Dugan Cultural Arts Center on Oct. 7.  She commented, ”It is an honor to serve the students and the staff of Cherokee Central School System and to represent my community, Birdtown.”

Griffin expressed her gratitude for the early payoff of the loan with First Citizens for the new Cherokee Central School buildings, signified by the burning of the note by Principal Chief Michell Hicks on Oct. 4.  These buildings opened to students in 2009.

Tammy Bradley of Big Cove and Chelsea Taylor-Saunooke of Wolfetown were also inducted as Board members for the first time in the Inauguration ceremony.

Board members are elected in staggered terms during the General Election which occurs every two years.  Every four years three are up for election.

Other Board members are T.W. Saunooke, secretary, of Yellowhill and Charlotte Saunooke of Painttown.   Yellowhill Council member David Wolfe serves as the Tribal Council representative.

Cherokee Central Schools Board of Education meets the first and third Monday of each month at 4:45 pm in the Central Office Conference Room.