EBCI tribal member Clarence “Ting” Rogers served with the U.S. Army 803rd Engineers in the Pacific Campaign during World War II.  He was captured and survived the Bataan Death March and the subsequent sub-human treatment at several Japanese prison camps. 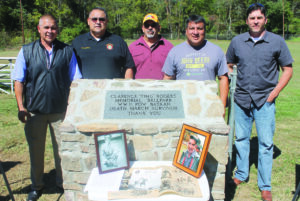 His sacrifice and service was honored during a ceremony in Birdtown on Thursday, Oct. 10 as the Clarence “Ting” Rogers Memorial Ballpark was dedicated.

“We’re here to honor a remarkable Cherokee,” said Commander Lew Harding, Steve Youngdeer American Legion Post 143.  “He endured unspeakable horrors.  We owe him a debt that we can never repay.  This dear brother suffered more than anyone could possibly imagine.”

Rogers enlisted on May 29, 1941 at Fort Bragg, NC and was later transferred to Fort McPherson, Ga. and then to Fort Belvoir, Va. where he joined the 803rd.  He was captured on April 9, 1942 and was sent on the seven-day Bataan Death March.

Warren Dupree, Post 143 service officer, read an account of Rogers’ time on the Death March and the prison camp.  “This hellish journey lasted for seven days and nights, during which Ting endured with only one canteen of water and one can of corned beef which he had bought from a Phillipino for the sum of $24.  Anyone who fell, whether from exhaustion, hunger, or accident, was killed by their Japanese captors.” 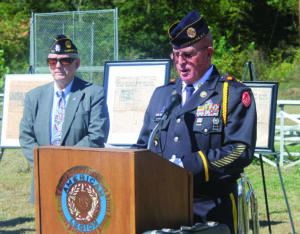 He continued, “Once at Sanfernando, the Japanese put men numbering around 1,000 in a quarter-acre lot, the whole of which was knee-deep in mud.  It was in that mud that Ting and the other unfortunate prisoners slept, receiving only one small kit of half-cooked rice each day.”

Rogers was transferred to Caban Atican Prison Camp where he contracted severe double pneumonia.  He and other soldiers endured the intense cold winter weather as well as other unspeakable acts, “Several times a day, Ting and the others would suffer at the hands of the Japanese soldiers who beat them with an iron pipe.”

Rogers’ weight plummeted to 94 pounds.  He remained in a prison camp until the end of World War II.

“Ting loved his God, his family and country, his church, and his community, and was well loved in return,” said Dupree.

Principal Chief Michell Hicks said at Thursday’s event, “I’m really proud of how us, as Cherokees, celebrate our veterans.  We take great pride in honoring them.  We look forward to many, many more years of people using this ballpark and learning about the brave deeds of Ting Rogers.”