What do past presidents George H.W. Bush and George W. Bush, inventor Samuel Morse and Law & Order creator Dick Wolf have in common with EBCI tribal member Caleb Teesateskie?  They all studied at the prestigious Phillips Academy in Boston, Mass. 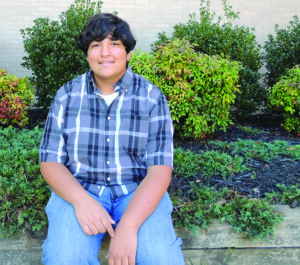 Caleb Teesateskie, the son of Joey and Melinda Teesateskie of the Snowbird Community, has completed one out of three summers in the Mathematical and Science (MS) 2 program at Phillips Academy in Boston, Mass.
(Photo courtesy of Brenda Norville/Graham County Indian Education)

Teesateskie, the son of Joey and Melinda Teesateskie of the Snowbird Community, has completed one out of three summers in the Mathematical and Science (MS) 2 program at Phillips.

“My experience this past summer, while attending Phillips Academy, was challenging but fun,” said the Robbinsville High School freshman.  “I had class six days a week from 8am – 2pm and a mandatory two-hour study hall every evening.  It was a very prestigious and rigorous program, but going was one of the best decisions I ever made.”

The program Teesateskie entered is an extremely competitive program which focuses on enhancing the mathematical and scientific knowledge and abilities of minority students from regions throughout the United States.  This program allows students of very diverse backgrounds to join together socially and academically to become even more competent and confident in their abilities.”

“It helps me academically and helped me to learned better study habits,” said Teesateskie.  “I felt more comfortable with other Natives who shared the same interests and was smart like me.  It prepared me to be away from my family when I go to college.  I recommend that other enrolled members seek information on this program, and if interested, to apply.”

The (MS) 2 program encompasses three summers and students will take rigorous courses in advanced math, science, and English, while also exploring other interests, such as music.  Overall, this prestigious (MS) 2 program has a tremendous success rate.  Between 2002 and 2010, 265 students graduated from the program and 98 percent went on to a four-year college or university and many go on to an Ivy League University.

Approximately 30 out of 400 students are chosen each year from a large pool of applications judged in several areas, including academic excellence and ability, community service, leadership, cultural knowledge and experience and a desire to major in math or science in college.  After making the initial round, finalists are judged in a one-on-one interview.

The Director, Dianne Cruz, flew down to interview Teesateskie personally.  He is the first EBCI tribal member to be chosen for the program, and she feels they will benefit from learning about his rich culture and experiences.  After attending the program for three summers, he will graduate from the Academy and be named a US Scholar.   Teesateskie will be better able to pursue a career in fields such as engineering, science, medicine, and computer technology.  He hopes to become a forensic scientist/medical examiner.