The 2013-15 Tribal Council of the Eastern Band of Cherokee Indians and three new members of the Cherokee School Board took their oath of office during an Inauguration ceremony at the Chief Joyce Dugan Cultural Arts Center on Monday, Oct. 7. 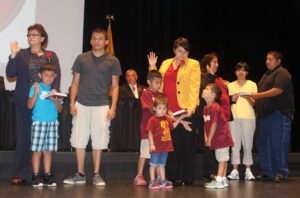 Three members of the Cherokee School Board take their Oath of Office including Gloria “Punkin” Griffin, Chelsea Taylor-Saunooke and Tammy Bradley.

Pastor Denny Crowe opened Monday’s event with a prayer.  Vice Chief Larry Blythe served as emcee and commented that he is looking forward to working with the new Tribal Council and School Board members.

Principal Chief Michell Hicks commented, “I want to congratulate Council.  I look forward to working with you.  I think the next two years will be bright for the Tribe.”

He said it has been 11 years that he and Vice Chief Blythe have held their respective offices.  “Every day has been an enjoyable day, and I learn something every day.  There’s a lot to do, but I have every confidence that we’re going to get it done.”