The Museum of the Cherokee Indian announced on Monday, Oct. 7 that James “Bo” Taylor has been named its new executive director. Taylor has been serving as Tribal Council representative for the Big Cove community for the past two years and is also a cultural ambassador for the Eastern Band of Cherokee Indians.  He begins Nov. 1. 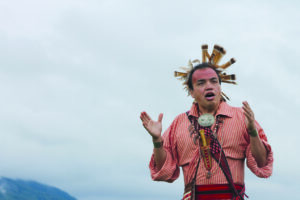 James “Bo” Taylor, shown here at the 2012 Tri-Council Meeting held at the Kituwah Mound, has been named the new executive director of the Museum of the Cherokee Indian. (SCOTT MCKIE B.P./One Feather)

“We are thrilled that we are able to obtain the services of Bo as our new Director of the Museum of the Cherokee Indian,” said Robert Blankenship, president of the Board of Directors of the Museum.  “Bo learned to speak the Cherokee language as an adult, and practices our Cherokee traditional ceremonies and dances.  Bo also understands tribal government, having just completed a term on Tribal Council.  Bo previously served as the Museum’s Archivist.  We look forward to bringing all his experience and education back to the Museum, replacing Ken Blankenship, who is retiring after twenty-eight years.  Bo is dedicated to his Tribe and takes very seriously any role he can play in seeing that our young children are knowledgeable about their history, heritage, and culture.”

As executive director, Taylor will be responsible for day-to-day operations of the Museum, a non-profit organization whose mission is “To preserve and perpetuate the history, stories, and culture of the Cherokees.”  With more than 30,000 square feet, the Museum houses a permanent exhibit and traveling exhibits; Archives; Artifact Collections; and Museum Store.  Museum programs include festivals, publications, courses, workshops, research, and cultural revitalization projects.

“My love and passion has always been for Cherokee culture, and I have always believed in the mission statement of our Museum,” said Taylor.  “Some museums are for things that are dead and gone, but our Museum is a living, breathing museum because our people and our culture are still alive.  I hope to bring all my efforts to take the Museum to a new level and to keep our culture alive.”

Known for his work in preserving and perpetuating Cherokee culture, Taylor has lectured around the country, appeared in documentary films, and teaches Cherokee language as a second-language learner.  He is a founding member of the Warriors of AniKituhwa, traditional dance group who are cultural ambassadors for the Eastern Band of Cherokee Indians.  Taylor’s CD, Rebuilding the Fire: Traditional Songs of the Eastern Band of Cherokee, received a Nammy from the Native American Music Association in 2010.

Taylor is married to Esther Brown Taylor, librarian for Cherokee Central Schools.  They have two daughters.  Prior to serving on Tribal Council, Taylor worked as Archivist and Cherokee Language Instructor at the Museum for twelve years. At Harrah’s Cherokee Casino, he worked as a Tribal Gaming Inspector, Kitchen Supervisor, and in Human Relations.  He has worked as a leadership training consultant and community action coordinator.  He received a bachelor’s of science degree in 1994 from Western Carolina University, with a major in Anthropology and a minor in Cherokee Studies.    For more information about the museum, go to www.cherokeemuseum.org