A new flagpole plaza has been constructed in front of the EBCI Council House.  It was dedicated during a ceremony on Friday, Oct. 4. 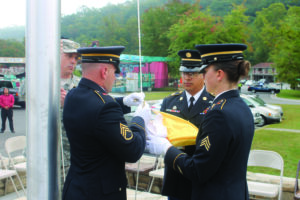 “The creation of this flag plaza is to honor our nation, our state and our tribal nation,” said Commander Lew Harding, Steve Youngdeer American Legion Post 143.

He said the plaza will be to honor tribal leadership throughout the history of the Tribe.  “It’s a labor of love really.”

Commander Lew Harding, Steve Youngdeer American Legion Post 143, reads the wording that will be inscribed on a bronze placard for the new flag plaza.

Principal Chief Michell Hicks commented, “It makes me so proud to be part of the Cherokee people today.  It’s about the pride.  That’s what this flag ceremony here is about today.”

He thanked his wife, First Lady Marsha Hicks, for the idea for the project.  “I want to thank Marsha.  She’s a real stickler of how a flag should fly.”

Chief Hicks related that the stone that decorates the plaza was salvaged from the Boundary Tree project several years ago.

Then, members of the Post 143 Color Guard fired a seven-gun salute in honor of the plaza.