Congressman Mark Meadows (R-NC) has been hosting Town Hall meetings throughout western North Carolina in the past few weeks.  He held one in Cherokee at the Chief Joyce Dugan Cultural Arts Center on Thursday, Aug. 22. 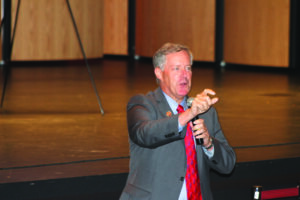 “We have tried to be open and transparent and get feedback,” said Rep. Meadows of the reasons behind his meetings.  “There have been some good, constructive opinions.  We have an open-door policy and truly want to serve you.”

His staff operates the first Congressional office on tribal lands.  “My commitment to the Native Americans here is unflinching.  Outside of my office in Washington, DC flies a flag of the Eastern Band of Cherokee Indians.”

There were various topics discussed at Thursday night’s meeting including health care reform, immigration reform, gun laws, sequestration, federal funding of programs such as Indian Health Service, and others.

Mary Wachacha, an EBCI tribal member from the Yellowhill Community, asked about the current IHS  budget which she said is “woefully underfunded”.

Rep. Meadows commented, “We’re trying to allow better management and flexibility with the money.  We don’t manage the process…it causes real concern and hurt in some agencies.  A lot of time, administratively, the money gets sucked up in D.C.”

Shawn O’Neill asked if Congressman Meadows supports immigration reform to which he responded, “I’m for securing our borders.  I’m not for amnesty.  We must fix the immigration process which I feel is broken.  I’m for working on a comprehensive immigration reform that solves the problem, fixes it, once and for all.  We need a simple program that works very efficiently.”

Sequestration has affected every federal program, and those effects are being felt in the nearby Great Smoky Mountains National Park.  Balsam Mountain Campground in the Park has been closed due to cuts, and EBCI tribal member Mary Jane Ferguson asked if it would be opened in 2014.

“I’m hopeful and I believe it will be open, but I’m not in a position yet to say yes,” Congressman Meadows noted.

He went on to say that federal spending needs to be looked at very carefully.  “Last year, $107 billion went out from the federal government and we don’t know where it went…I’m really troubled by that.”

Mary Herr asked the Congressman why he voted against the VAWA (Violence Against Women Act).  “There was a House bill that, quite frankly, didn’t protect Native Americans.  I spoke to people from here, and they told me not to vote for that House bill, and I didn’t.”

He related that he represents over 749,000 in western North Carolina.  “We do our best to vote the way people ask us to vote.  For instance, if it is on education, I’ll call educators.”