EBCI Beloved Man Jerry Wolfe served in the U.S. Navy in World War II and was part of the famous Normandy Invasion on Dec. 6, 1944.  He was honored on Thursday, Aug. 22 for his service to his country as well as his Tribe and community by being given the Patriot Award from the Civilian Marksmanship Program (CMP).

“We wanted to recognize the true heroes of America,” said Scott Maddox of the CMP on why the Patriot Award was first established.  “Today, young people find their heroes in places where maybe they should not find them.  While it’s admirable to have athletic prowess or it’s admirable to be able to play a role of someone in a movie or on television, neither one of those skills makes you a hero.  The heroes in America are those who have gone above and beyond to help out their fellow man and fellow woman.” 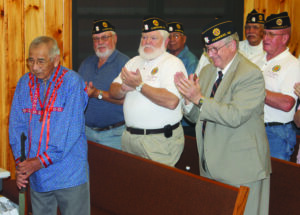 Members of the Steve Youngdeer American Legion Post 143 give Wolfe a standing ovation after he was awarded the Patriot Award on Thursday.

“We have heroes that walk among us, none more so than our recipient today.  The Patriot Award reaches out to outstanding veterans who had outstanding service and coupled that with continuing to serve in the community they live.”

Wolfe was given the Patriot Award, an actual M1 Garand rifle along with a certificate, by Maddox and Congressman Mark Meadows (R-NC) who nominated him for the award.

“You continue to serve day in and day out,” said Congressman Meadows to Wolfe.  “We have a slang term of a ‘straight shooter’ and that is exactly what you are, a straight shooter.  Your friends, your family and your tribe believe you to be that sort of man and that is an honorable man, and I want to say thank you on behalf of a grateful nation.”

Members of the Steve Youngdeer American Legion Post 143 came out for the honoring, and Post Commander Lew Harding commented, “We are proud to salute our brother.  I’m proud to salute a fellow Navy brother.  Jerry, your leadership, not only in the military, but here in our community as our cultural, in fact our spiritual leader, to me and to us, you have become a blessed brother and we honor you here today.”

A humble man, Wolfe stated, “It’s good to be here.  Never in my life would I have dreamed of this.  I’m just thankful to be here, and I thank my Creator for being here.  The Creator will get you home safely.  He will be with you as you travel.”

Wolfe’s daughter, Gerri Grady, said, “It’s just amazing.  Father is a humble man.  He always has been.  He always will be. It’s amazing, and we are truly grateful.”

Principal Chief Michell Hicks commented, “Jerry, you’re a close friend and we appreciate everything you’ve done for our Tribe.  You really represent what it is to be a Cherokee.  Your daughter talked about being humble, and compassionate, but also passionate about what we expect, and we’re proud of everything you’ve accomplished in your lifetime.  You still have a lot to go.”

“Thank you for standing up for our country and for standing up for the Cherokee nation to make sure that folks understand that we’re still here, we survived, and we’re proud to know that we have so many men and women that have served in the military.”

Jim Townsend, of the CMP, related that the organization was created by President Theodore Roosevelt and was housed with the U.S. Army until 1996 when it was privatized as a 501(c)3 organization.  For more information on the Civilian Marksmanship Program, visit https://www.odcmp.com/