The Painttown Community will have a new community center in less than a year.  A groundbreaking ceremony was held for the new center at the site off of Wrights Creek Road on Wednesday, Aug. 21.

“It’s a great day for Painttown,” said Principal Chief Michell Hicks.  “This project has been worked on for awhile now, and a lot of different people have put a lot of effort into it.”

Chief Hicks thanked all of the Tribal Council representatives, current and past, who helped to work on the project as well as the Painttown Community Club for their role.

“I just want to thank the Painttown Community, he said.  “We’ve got a great community here.  It’s a quiet community, but we love Painttown.” 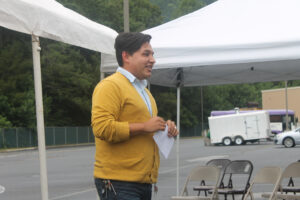 Chief Hicks added, “Projects can’t get done by one person.  It takes a team, and I think we’ve put together a nice team.”

The 12,000 square foot community center will be built on a 2.1 acre lot and will include a full-size gym with hardwood floors, full bleachers on either side of the court, a kitchen, a community room, a workout room, and two office spaces.  The estimated completion date is June 30, 2014.  The project has a budget of $1.9 million which is being funded out of the Tribe’s CIP budget.

“It is a privilege for me to stand in today for Vice Chief Larry Blythe because this is a really important project for him,” said Phyllis Ashenfelter, a Painttown Community member working in the Office of the Vice Chief.  “I, too, appreciate all of those Council members, past and present, who worked diligently with whoever they needed to work with to bring this to be.  I think that our community has long needed this.”

“This is a monumental day in Painttown history, and I’m just glad to be a part of it.” 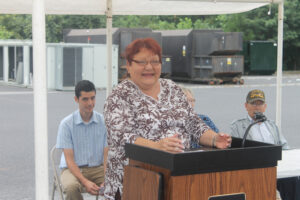 Phyllis Ashenfelter, a Painttown Community member who works in the Office of the Vice Chief, speaks during Wednesday’s event. She called it “a monumental day in Painttown history”.

Painttown Rep. Tommye Saunooke commented, “This is a joyous occasion especially for all of us who were personally involved in this endeavor…it’s taken 14 years of patience and persistence.”

She said garnering a new community center for Painttown has been a project she has worked on since she first entered Tribal Council 14 years ago.

“Today, Painttown, I salute you as we celebrate the groundbreaking of the Painttown Community Center.”

Painttown Rep. Terri Henry said, “I just want to give all of the credit to Tommye (Saunooke) for her leadership for making this happen and to all of the Council members and the people that are standing here today and those who have gone on before us who helped to create the Painttown Community that we have.

She related that 50 years ago, Noah Arch let the Painttown Community use the land where the current Community Center sits.  Families were asked to bring cinder blocks to build the current Center.  “A community came together, cinder block by cinder block, and built that Community building up, and I think that is a real testament of how community comes together to get things done that it needs.”