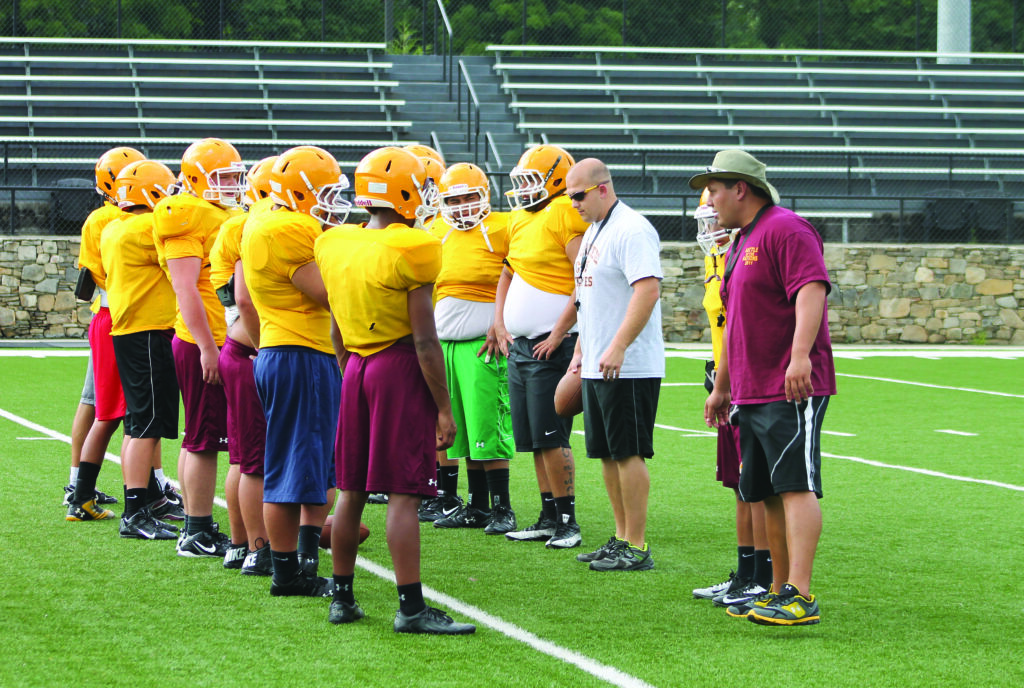 The Cherokee Braves open their 2013 season at home against Tuscola on Friday, Aug. 23.  The maroon and gold will be under the leadership of new head coach Kiah Smith who has high hopes of building a solid program.

“I’m impressed,” said Smith, a Cherokee Nation citizen who comes to Cherokee off a four-year coaching stint at Tulsa Memorial High School in Oklahoma.  “There’s a lot of things that people said couldn’t happen that are staring to happen.  We’ve got small changes that are occurring that are good.  We had a 7am practice on a Saturday, and out of 22 kids that could practice, we had 20 show up.  People would tell me ‘you’re never going to get those kids out there that early’, but they were out there.” 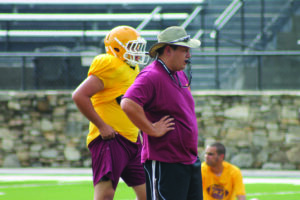 Coach Smith, who played college football at Haskell Indian Nations University, said there has been a learning curve with the players learning a new system on both offense and defense, but he said the players have been putting in the work to improve every day.  “We practice different.  We just do a lot of things different, and it’s new to them.”

The Braves will take the field on Friday with a roster of 29.  “We’re going to try to play as many kids one-way (only offense or defense) as we can and still be competitive.  One of the biggest problems here is retaining kids…I think one of the ways to keep kids is you give them a chance to play.”

Coach Smith said on offense the Braves will try to spread the field and throw the ball more this year.  “We’re going to try to do something different.  We don’t have a whole lot of kids.  We don’t have a lot of size anymore.  We have to do something outside of the norm.  We can’t just line up and muscle people and run it down people’s throats.  We’re going to try to get people out into space.  It’s tough, at any level, to tackle people out in space.”

He said the team is going to concentrate on the basics this season.  “When you concentrate and perfect little things, things will take care of themselves.”

Coach Smith related they only have one conference game before the mid-season break.  “It’s the conference games that are really important, and if we can get better every week before the break, then I think we’ll be able to do pretty good.  We’ve got talent here still.”

Friday night is Alumni Night, and all CHS alumni are invited to be recognized at the game.  The Cherokee Booster Club relates, “All alumni in attendance will be eligible for drawings throughout the evening, and alumni will be recognized at halftime.  Please be sure to pick up your raffle ticket at the alumni table when you come out to support the Cherokee Braves kick-off game at 7:30pm!”