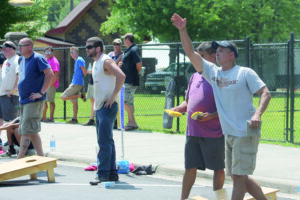 The Madison Hornbuckle Cancer Foundation Cornhole Tournament, held at the Cherokee Indian Fairgrounds on Friday, Aug. 2 raised a total of $1,112 for the Foundation.  There was a tie for first place between Team P&J (Patrick Maybin and Jonathan O’Shields) and Team B&B (Keith Buck and Justin Banner).  Team Buck & Lowe (Nathan Lowe and Cody Buck) came in third.

“We want to extend a very special than you to Jeremiah Fennessy and Trista Welch for helping to organize and run this tournament as well as all our volunteers that helped score,” Foundation officials related.  “And, we especially want to thank everyone that came out to play in the Tournament.  Because of you, we were able to raise $1,112 which will go directly to help families that have children with cancer.”