COURAGE WITH A SMILE

Teena Watty greets life and cancer with a smile

Teena Watty is around 5’ 4” tall, but her courage, perseverance and positive outlook on life make her seem taller than any mountain in the Smokies.

She greets everyone and every day with a smile.

She also greets cancer with a smile.

Teena, an EBCI tribal member from the Wolfetown Community, was diagnosed on Nov. 4, 2011 with a rare kind of cancerous brain tumor. 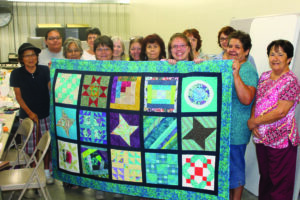 The Qualla Quilters group presented a quilt to Teena Watty (3rd from right) during their regular meeting at the EBCI Extension office on Monday, Aug. 5. Teena has been battling a rare form of brain cancer since 2011. (SCOTT MCKIE B.P./One Feather photos)

Doctors told Teena she may have had the tumor, which has grown like a vine around her brain, for up to 10 years.

Several days later, Teena was in surgery which was followed by a trip, the first of many, to the M.D. Anderson Cancer Center in Houston, Texas.

“I’m still tore up,” said Francine, “but, I’m a strong mother and we’ve got to fight this.  There’s no cure for this brain tumor.  Houston has only seen a few like it before.”

Teena and Francine travel to Houston every two months at an expense of almost $1,500 per trip.  They related that the Eastern Band of Cherokee Indians does pay for their flights, but there are still other expenses such as hotel rooms and food.

And, that’s where the community has come in.

“God’s been so good to us,” said Francine.  “I couldn’t have done this without God, our family and friends and all of the prayers.  If not for everyone’s help, we would not be able to make the trip.”

Three benefits have been held in Cherokee with many more personal donations coming in from family, friends and churches.  “If it wasn’t for the people helping us, I don’t know where we’d be,” said Francine.  “What they’re doing is God-sent.  God’s paved the way for us.”

Teena commented, “It gives me such peace that all of these people that I don’t even know are praying for me.  It’s people like that that care that much about you that makes you realize this Tribe is really good.”

After a year of chemotherapy, doctors recently stopped the treatment for Teena as it was making her very ill.  The chemotherapy has caused the tumor not to grow any larger, but it hasn’t shrunk either.

Francine related that Teena insists on happiness.  “Teena has never let this get her down.  She doesn’t want any tears.”

Francine also tries to stay positive.  “Even our trials are a blessing.  God may choose to heal her.  He can perform miracles.”

One thing that Teena does miss is personal interactions with her friends and family in the community.  Her compromised immune system and the fact that too much brain stimulation often leads to seizures have kept her away from those she loves.  And, Francine commented that they both appreciate everyone understanding.

“Once her immune system strengthens, we are going to start visiting,” said Francine.  “We’re going to start being seen.  Teena wants to have a potluck at the Wolfetown Gym to visit with everyone when she is well enough.  She loves people.”

Even with all she is facing, Teena said she worries, not about herself, but about her grandparents (Sam and Elsie Watty) and her dogs.  “They’re my world.”

And, in Teena’s world, everything and everyone is greeted with a smile.