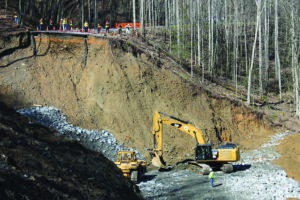 A crew works on Feb. 27 on rebuilding a section of Newfound Gap Road that was destroyed due to a landslide in January. During a public meeting on Tuesday, Aug. 6, Park officials outlined future road projects including one involving slope stabilization in the hopes that another slide, like the one pictured, doesn’t happen again. (SCOTT MCKIE B.P./One Feather)

“We know how any road closure can affect our surrounding communities,” said Park superintendent Dale Ditmanson at a public meeting at the Oconaluftee Visitor Center on Tuesday, Aug. 6.

Ditmanson and other Park officials outlined four projects ranging from resurfacing portions of Newfound Gap Road to slope stabilization near Deep Creek Trailhead.  He said the slope stabilization is not an immediate problem but did relate, “If we don’t address it, it will be a serious problem down the road.”

The slope stabilization project, the result of a small slide, will begin in November and is expected to be completed in May 2014.  It is located around two miles south of the Newfound Gap parking area.  The slide was found by a Park employee in September 2012.

A soldier pile retaining wall will be built to strengthen the area and prevent further slides.  Park officials are currently monitoring the site with time lapse photos taken every six hours.

Another project discussed was Phase 4 of the Newfound Gap Road Rehabilitation which actually began in May.  It involves rehabilitating and resurfacing a 6.1 mile stretch of the road from milepost 6.2 to 12.1 on the Tennessee side of the Park.  All of the work on the North Carolina side of the road was completed in the first three phases.   Phase 4 is expected to be completed next spring or summer.

Phase 5 of the Newfound Gap Road Rehabilitation is set to start in November 2014 and be completed by November 2016.  It will involve the last six miles of the road going into Gatlinburg from mileposts 6.2 to 0.  This would complete the rehabilitation project on the road which started in 2006.

A small project involving resurfacing the Gatlinburg Bypass and 700 feet of Newfound Gap Road has started and is expected to be completed in September.  Ditmanson related that the Bypass will be closed nightly from 8pm – 7am and daytime single-lane closures are scheduled Monday – Thursday.