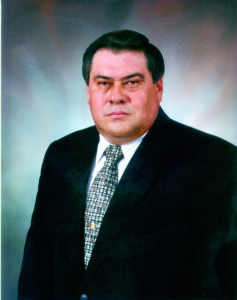 Chairman Barbry was elected Tribal Chairman in 1978 and was appointed as Tribal Administrator that same year.  He had served in these capacities to this day.  Under his leadership, amazing changes took place. Where once there were barren fields and wooded areas with a few shanties scattered about, one may now see a unique and modern housing development, Tribal Administrative Office, a Health Department and Social Services Office, Gaming Board and Gaming Commission Office, and Tribal Police and Court Building. Tribal landholdings also significantly increased during Barbry’s tenure as Chairman. During his leadership, the Tunica-Biloxi Tribe of Louisiana received federal recognition in September of 1981.

Chairman Barbry was a nationally known American Indian leader, serving on the board of the United South and Eastern Tribes, representing federally acknowledged Tribes from Louisiana to Maine. He also had a leadership role in the Louisiana Inter-Tribal Council, an organization that serves federal and state-recognized Indian communities. He is descended from a long, unbroken line of Tunica-Biloxi chiefs. His grandfather, Elijah Barbry, was the first activist chief in Louisiana to attempt to get a federal response to the needs of the Louisiana Indian people.

Under Chairman Barbry’s leadership, the Tunica-Biloxi repatriated artifacts looted from their 18th century cemetery near St. Francisville.  A court action initiated from Tunica-Biloxi helped build the foundation for the Native American Graves Protection and Repatriation Act.

He was named the recipient of the Avoyellean (A-VOY-EL-E-UHN) of the Year Award in 1993 by the Avoyelles Journal, the highest award given in the parish. In 1996, the Marksville Chamber of Commerce named him Minority Businessman of the Year. He received the 2005 Leadership Award of the National Indian Gaming Association. In 2006, he was named a Louisiana Legend by Louisiana Public Broadcasting in recognition of his cultural, educational, and economic contributions to the region and the state. He was the first American Indian to receive this honor.

In December 2011, Chairman Barbry was awarded an honorary doctorate of humane letters by Northwestern State University during its fall commencement exercises.

Chairman Barbry is survived by his wife, Gail Kelone Barbry, and two sons; Earl, Jr. and Joey along with two grandchildren Alexis and Annabelle.

Following are statements of various people throughout Indian Country on the passing of Chairman Barbry:

“The hearts of the USET Nations are heavy and saddened on this day due to the passing of a beloved and treasured leader, Tunica-Biloxi Tribe of Louisiana Chairman Earl J. Barbry, Sr.  Our hearts, blessings, and prayers go out to Chairman Barbry’s family and to the entire Tunica-Biloxi Tribe of Louisiana. Chairman Barbry has made a great and lasting impact on many Tribes and individuals in Indian Country.   His leadership, vision, and passion to advance, strengthen, and rebuild Tribal Nations have set a shining example of unity, empowerment, and compassion.

While the Tunica-Biloxi Tribe of Louisiana is saddened by the loss of such a great leader, it is USET’s hope that hearts and souls in Marksville, Louisiana and throughout Indian Country are warmed by the empowering legacy Chairman Barbry leaves.  Our future generations will grow from his leadership, and his work and spirit will no doubt feed the next seven generations of American Indians.  Our daily affirmations should include prayers to follow in his footsteps and build on his work.  The USET Tribal Nations stand today with the Earl J. Barbry, Sr. Family and the Tunica-Biloxi Tribe of Louisiana to grieve the loss and celebrate the life of a great Tribal advocate, defender of American Indian sovereignty, humanitarian, and family man.  Let us commit our prayers and medicine for his journey to unite with our ancestors. When the last tear is shed, USET Tribal Nations stand ready to wipe those tears away and rejoice in Chairman Barbry’s legacy.

The USET office in Nashville, Tennessee has lowered its flags to half-staff and would request all member Tribes and Indian Country to do the same today through memorial services for Chairman Barbry.”

“You’re (Barbry) a man with great vision.  You had the vision to bring a casino to Marksville.  I thought that would never happen.  It’s your influence and leadership that has taken us from a poverty stricken community.  It has been you that has made a great impact on all of our people.”

“The passing of Chairman Barbry is a thunderous silence. He was my Chairman and the older brother I never had.  He was a gift to the Tunica-Biloxi people. There will never be someone like him for us ever again. We are so broken hearted.”

“Chairman Barbry spoke softly and carried a big stick. – “Earl is one of the quietest, yet most effective leaders in Indian Country.  I remember my Tribe had not finalized the requirements to be federally recognized.  Through great leadership of people like Earl the way was paved for our Tribe to attend USET as observers and learn.  He and other Tribes knew we deserved recognition.  I distinctly remember Earl saying things are going to get better for Indian people as we are developing a whole new generation of leaders. Chairman Barbry has solved a whole lot of problems but not overnight.”

“Chairman Barbry was a great influence and mentor to Tribal leaders.  You (Chairman Barbry) have grown Tunica-Biloxi over the years to what it is today.  You are the best. You did a lot for other people.  Even when we (Jena Band of Choctaw) needed it, you paid our airfare so we could participate in things like USET.  I’ve learned a lot from you (Chairman Barbry).”

“The impact of Chairman Barbry’s great work can’t be measured. If the measure of a man’s life is the footprints he leaves behind in the lives of those he met along his journey, we can all find comfort as we mourn knowing that Chairman Barbry is walking on having gifted the world with immeasurable impact to so many.”

“On behalf of the IHS, we are very saddened by this news. We have lost a strong advocate for Indian health issues. This is a significant loss for Indian Country. We extend our heartfelt prayers to his friends and family.”

“The staff of the Bureau of Indian Affairs Eastern Regional Office mourns the loss of a strong and well regarded leader, Tunica-Biloxi Tribe of Louisiana Chairman Earl Barbry, Sr.  Chairman Barbry’s leadership, vision, and courage contributed to the strengthening of his Tribe and inspired many others.  We should all draw great strength from his legacy as we seek to move all Tribes forward with the same spirit as Earl J. Barbry Sr.”