Dylan Rose, an EBCI tribal member, will continue his baseball career next year at Catawba Valley College Community College in Hickory.  The Swain senior signed a letter of intent, along with teammate Taylor Jones who will also attend Catawba Valley, on Friday, May 24. 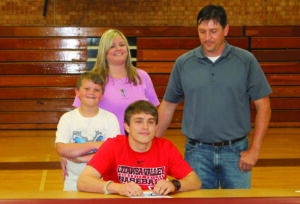 Rose said, “It’s phenomenal.  It’s something that I never pictured as a child that I would be doing, and now I get the opportunity to do it.  It’s a crazy feeling.  I think I will do well academically, and I think I will improve as a student and as a player.  I think it’s going to be a good time.”

Rose played two years of varsity baseball for Swain which spanned 42 games.  He went 40 of 112 with a .357 career batting average including 14 doubles, 8 home runs and 44 RBIs.  Rose scored 46 runs in his career and stole 19 bases.

His father, Albert Rose, added, “I am glad he is going to Catawba.  They have an excellent baseball program.  He’s worked his butt off and I hope it pays off for him.  They have a good academic program down there so it’s going to be good.  I’m proud of him.”

Albert Rose also related, “I would like to thank D.J. Written, his showcase coach, and coach Eric McConnell, for believing in him and making him a better ball player.”

Eric Cantrell, Swain head baseball coach, noted, “I am very proud of him.  It’s a great step.  It might not be the biggest college out there, but he’s still playing ball at the next level, and they’ll learn so much at the next level.”