CULLOWHEE – Just in time for this year’s Cherokee Indian Fair, Western Carolina University’s Hunter Library, in cooperation with the Museum of the Cherokee Indian, has posted 15 archival fair programs to its online digital collections.

These programs, printed each year by the Cherokee Indian Fair Association, typically were 20 to 30 pages each and listed the competition categories and monetary prizes awarded to winners. The online collection includes the programs from 1929 to 1950 with the exception of a stretch of years during World War II, when the fairs were suspended.

This program from 1950 is one 15 Cherokee Indian Fair programs now online through Western Carolina University’s digital collections. Image courtesy the Museum of the Cherokee Indian and Hunter Library.

While the library’s Special Collections unit has a Sylva newspaper article from 1915 announcing the fair and its prizes, there are no programs from the first decade of the October fairs. The earliest guide in the collection, for the 1929 Cherokee Indian fair, is from Hunter Library’s Special Collections; the other guides are in the collection of the Museum of the Cherokee Indian.

“Digitization projects like this one are a way to share historic images with the public. Scanning and tagging historic photographs helps preserve them, making it unnecessary for people to continually handle – and possibly damage – fragile materials,” said Anna Fariello, an associate research professor and head of Hunter Library’s digital programs.

This year’s Cherokee Indian Fair is Tuesday, Oct. 2-Saturday, Oct. 6, at the fairgrounds in Cherokee.

For the 1929 fair, prizes were offered for numerous agricultural products, Indian ball games and blowgun contests, as well as arts and crafts and a variety of textiles under the category of “Ladies’ Work.” In 1934, honeysuckle baskets were added to the list of basket categories, indicating its growing popularity and an expansion of the river cane basket tradition. The 1935 program includes a description of the pageant, “Spirit of the Great Smokies,” a forerunner of Cherokee’s popular drama “Unto These Hills.” 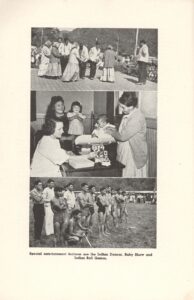 An inside page from the program for the 1950 Cherokee Indian Fair pictures ‘special entertainment’ including a dance, ‘baby show’ and ball game. Image courtesy the Museum of the Cherokee Indian and Hunter Library.

During World War II, the fairs, along with many community activities, were suspended due to a focus on the war effort. The 1946 fair was the first to be held after they ceased in 1941. Beginning that year, in addition to seeing displays of the finished craft entries, visitors to the fair were able to observe the techniques and processes involved in producing the items on view, with demonstrations of basket making, pottery construction, spinning, and weaving presented. The 1946 program features 11 photographs of various Cherokee places and people, including woodworker G.B. Chiltoskey, basket weaver Lottie Stamper and potter Maude Welch. This was the first year in which advertisements were added to the fair programs, including seven ads for Cherokee craft shops, one of which was the Qualla Arts and Crafts Cooperative. In the 1950 fair program, a 2½-page section was added to describe the history of Cherokee arts and crafts.

For more information about the project and WCU’s other digital archive projects, contact Fariello at fariello@wcu.edu or 828-227-2499.