In less than two years, Cherokee will have an adventure park resort.  Tribal Council recently approved the plans for a $92 million indoor facility that will include a water park, 302 hotel rooms, whitewater simulators, rock climbing, ziplines and more. 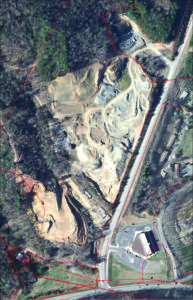 This aerial shot shows the property tract where the new adventure park will be built. It is located on Hospital Road. (Photo contributed)

The park will be built on a site on Hospital Road that was formerly slated for the Wal-Mart project.

He related that a groundbreaking on the project is currently slated for spring 2013.

“Initially, the project was $140 million,” said Lambert.  “So, we went back and we re-scoped it and revised it with our designer to reduce the investment but still gave us the quality of project.  We went from 400 rooms to 300 rooms, and by reducing that, we reduced the entry cost, but we also improved the anticipated performance across the board.”

Lambert said conceptual plans and drawings should be available within the next few months and those will be shared with the public.

As to the funding of the project, Lambert related, “What we’re looking at is a conglomeration of tribal equity debt as well as the New Market Tax Credits (NMTCS).”

“Basically, the government allows certain investors to invest into a qualifying project for approximately 20-25 percent of the overall cost of the project in exchange for receiving tax credits that will reduce that investor’s income tax liability (typically a corporate or institutional entity), wrote Red-Horse.  “The borrower (eventually the tribal enterprise) will receive the funding at a very low cost interest rate for seven years interest only, whereby then the funding is converted into equity in the project so there is no principal repayment of that portion, i.e., ‘free money’ for all intents and purposes.”

Doug Cole, EBCI Planning and Economic Development manager, said the adventure park will attract people from 2 to 70 years old.  “When you add the adventure components such as the rock climbing, whitewater rafting, ziplines and those types of things, you take the demographic way above just the teens.”

“It also helps us bring in some convention business,” he commented.

Lambert said the key markets are going to be Atlanta and Charlotte.  The target audience will mainly be families with children who live within a three hour drive of Cherokee.

“The purpose of this project is really to bring the families back, to really position us as a destination and the key measure of a destination is overnight stays.”

Cole related that all of the rooms at the resort are being designed to hold at least six people.