Two young ladies are set to compete for the 2012 Miss Cherokee title.  Kelly Driver and Karyl Frankiewicz will compete during the pageant scheduled for Saturday, Sept. 29 at 6pm at the Chief Joyce Dugan Cultural Arts Center.

“This year we have two, beautiful, young, talented women,” said pageant coordinator Deb West.  “Although our numbers are down a little bit, they compete really hard and we’ll have a beautiful show.  Even though we have two contestants, they deserve no less.” 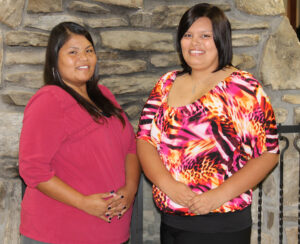 Kelly Driver and Karyl Frankiewicz will compete for the 2012 Miss Cherokee title at the pageant scheduled for Saturday, Sept. 29 at 6pm at the Chief Joyce Dugan Cultural Arts Center. (SCOTT MCKIE B.P./One Feather)

Driver is the daughter of Frank and Diane Driver, and she resides in the Big Cove Community.  She graduated from Cherokee High School in 2006, and earned her bachelor’s degree in English from Western Carolina University in 2011.  Driver is currently a Cherokee Language teacher at Cherokee Middle School.

“I would like to encourage others to go to college and take advantage of what the Tribe offers us,” she said.  “Push yourself to do better than you think you can because if I can do it anyone can.  It was hard for me because I had so much stuff going on at school, but I accomplished it and graduated and I’m a Cherokee Language teacher now.”

Frankiewicz is the daughter of Melissa Arch and Quinton Frankiewicz, and she resides in the Birdtown Community.  She graduated from Cherokee High School in 2010 and is currently a sophomore at Southwestern Community College with a double major in Fine Arts and Early Childhood Education.

“We’re losing our language,” said Frankiewicz.  “There are only around 300 fluent speakers left on the reservation.  Most are over 50 years old and they are passing away every year.  So, in order for us to become a better Tribe, we need to bring back our language and culture, which we are already doing with the Kituwah Academy.  We just need to bring back our culture and what it means to be Cherokee.”